Fox kicked off a country music game of thrones on Sunday with a sneak peek at the premiere of Monarch, a twisted family drama where the only thing bigger than the hair… are the secrets.

Episode 1 introduces viewers to the Romans, the self-described “first family of country music,” led by egomaniac Dottie (Susan Sarandon) and her husband Albie (Trace Adkins), who’s basically the human equivalent of a dirt road. On the surface, Dottie and Albie have the perfect life, assuming you look past her terminal cancer diagnosis, his history of cheating, and the fractured relationships they’ve cultivated with their understandably screwed-up kids.

Let’s talk about those kids for a second: There’s Nicky (Anna Friel), whose own solo career has been delayed, if not completely derailed, by her mother’s inability to share the spotlight; Gigi (Beth Ditto), a happily married lesbian who never even bothered to pursue a career, despite her talent, because she didn’t want to upstage Nicky; and Luke (Joshua Sasse), a frustratingly handsome schemer who looms large as CEO of the family’s record label.

“Good people can do bad things for the right reason, and the Romans certainly do their share of bad things, but there’s always a justification behind it,” showrunner Jon Feldman tells TVLine. “Whether we agree with what they do is, of course, up to the audience.” 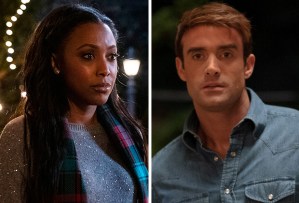 Among those “bad things” is an affair between Luke and Gigi’s wife Kayla (Meagan Holder), which Feldman says is “not a wanton sexual affair. They’re drawn together for certain reasons, emotionally. Like all of the stories and mysteries, it does continue and build and have some surprising twists and turns. The audience’s initial reaction may not be their ultimate reaction to that relationship.”

As you’ve probably realized, cheating is a common occurrence in the Roman family, hence Nicky’s lack of surprise upon discovering that her actor husband Clive (Adam Croasdell) is sleeping with yet another younger co-star. And towards the end of the premiere, Albie “confesses” to a brief affair four decades earlier, one Dottie apparently knew about all along.

But not all of the Romans’ secrets are open ones. For example, we don’t know whose body Albie is seen burying in the premiere’s flash-forward, a plot device that is regularly employed throughout the season. We also don’t exactly what “unforgivable” things Dottie did, though her haunting memory of a burning barn probably has something to do with it.

“When she says she’s done things that can’t be forgiven, we’re going to find out exactly what that means,” Feldman teases. “It’s one of the mystery threads that will carry us through the first season, as Albie and Nicky and then the others catch up to what she actually meant. And it’s a doozy, I’ve got to be honest with you. It’s a pretty big reveal that we’re going to drop later in the season.”

But it’s the final twist of the premiere that’s sure to have people talking until Monarch returns in its regular time slot on Tuesday, Sep. 20 (9/8c). Determined to go out on her own terms, rather than succumbing to her cancer, Dottie convinces Nicky to help her attempt suicide with a lethal concoction of booze and pills. And the already unspeakable mother-daughter moment takes an even darker turn when Gigi unknowingly crashes the party and catches them in the act.

“It was a bold move,” Friel tells TVLine of a mother making such a request of her daughter. “My main question was whether the audience will understand that it’s what Dottie wanted, and that Nicky had no choice. Dottie asking her to make the ultimate sacrifice for her. I would hate to be in Nicky’s position and to have to make that kind of decision.”

OK, let’s talk about that Monarch premiere: How do you predict the Dottie-Nicky-Gigi situation will play out? Any theories about Dottie’s “doozy” of a secret? How do you think aspiring musician Ana will fit into all of this? Vote in our polls below, then drop a comment with your full review.