The houseguests of Big Brother 24 have orchestrated their share of Eviction Night blindsides all summer. But even before Thursday’s live episode began, the identity of this week’s evicted player seemed as foregone a conclusion as Alyssa bombing a geography test.

After Michael and Brittany alerted their fellow houseguests to Kyle’s troubling comments about this season’s BIPOC players — for a full overview of the controversy, head on over to my recap of Wednesday’s episode — it’s been hard to envision a scenario where Kyle wouldn’t hit the block as a replacement nominee for either Brittany or Taylor. Whether Kyle’s fellow contestants ultimately felt compelled to evict him because of personal convictions, long-term strategy, simple optics in the eyes of America, or any combination of those factors, it’s seemed increasingly likely that the consequences for Kyle’s actions would come in the form of his eviction.

To that end, let’s get into the events of Thursday’s hour:

* After his emotional trip to the Diary Room on Sunday (which lasted several hours, but was not shown at all on Thursday’s ep), Kyle confronts Brittany about what she’s been alleging, insisting that he “never said” anything to her about The Cookout or racially motivated alliances. Brittany fires back that he absolutely did, and she tells him that when it came time to pick sides, she and Michael couldn’t pick Kyle’s side. 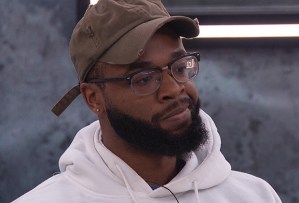 * Kyle talks with Terrance and Monte in the Have-Not Room, where he admits to grouping together the house’s minorities in his mind — though he attempts to justify that grouping by explaining that, from his perspective, the BIPOC players all had a unifying “why” as to why they’d want to win the game. Terrance calls Kyle’s “unifying ‘why'” argument “bulls—t,” and in a particularly blunt moment, he says, “It should have been you that left. Not Joseph.” (At the risk of getting all, “Well, actuallyyy…” about what’s been happening on the live feeds, I feel compelled to share that Terrance ultimately gave Kyle strong emotional support this week, even going so far as to suggest to others that Kyle stay in the house, because his eviction would take away a learning opportunity. Do with that information what you will!)

* To avoid a game of telephone over such a delicate topic, Turner suggests a house meeting to air all grievances, and the conversation is expectedly bumpy — not least because, apropos of nothing, Kyle reveals the Final Two deal he’s had with Turner. That’s a choice!

As for the discussion of Kyle’s previous statements, it’s an emotional journey that begins with Kyle acknowledging his sheltered upbringing and implicit biases, and ultimately ends with the house — particularly Monte and Taylor — showing Kyle grace, love and the opportunity for further education. Terrance does have a bone to pick with Michael and Brittany about why they sat on this information for two weeks; the duo expresses regret for doing so, but Terrance doesn’t seem to buy it. 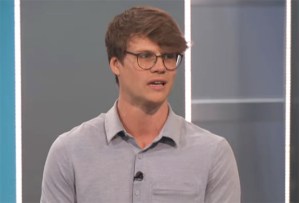 * Unsurprisingly, Kyle is named as Brittany’s replacement when Michael uses the veto on her. Kyle expresses an interest in having some tough conversations with his fellow houseguests about the week’s events; Monte, at least, takes him up on that, and the men have an extremely emotional chat about why Kyle’s words and biases hurt Monte so deeply.

But as saddened as Monte absolutely is by Kyle’s actions, it’s clear he still holds Michael and Brittany at least partially accountable for the shady circumstances under which Kyle’s remarks were revealed. To that end, even though Monte is happy to nominate Alyssa and Terrance if he’s Head of Household next week, he tells Taylor that he’s also interested in taking a shot at Michael — arguably the biggest threat to everyone‘s game at this point — as soon as that opportunity presents itself. “We’re on the same page,” Taylor tells him.

* In more Expect the Completely Expected events, Kyle is evicted in a 5-0 vote, and receives noticeably tepid applause — though no boos! — from the studio audience. Unfortunately, Julie Chen Moonves’ conversation with Kyle is nowhere near as compelling as her post-game chat with racist Season 15 contestant Aaryn Gries, but she does touch upon several of his lowest moments in the game.

“At the time, it didn’t click in my mind,” Kyle says, when asked if he realized he was pitching an alliance division based on race. “After looking back… I now realize how terrible that was, and I should have realized it from the start. I apologize to everyone watching, and everyone in the house.”

* The game churns on, though, and a new Head of Household competition gets underway as the credits roll. Meanwhile, Julie lets us know that Zingbot is on his way to the BB house — yeesh, thank goodness for Kyle’s sake that he’s already been booted — and a two-hour double eviction episode awaits us next Thursday.

Video of Kyle’s post-eviction interview will be added when it becomes available. In the meantime, weigh in below with your thoughts on Thursday’s hour.