DC’s Stargirl kicked off Season 3 on Tuesday with a Neil Diamond tune, before teasing a torn Cosmo, shaking up the rejuvenated JSA, and then leaving us with a killer cliffhanger.

Set to “Coming to America,” the opening montage catches us up on life in Blue Valley some weeks after Eclipso’s thwarted reign of terror. Courtney and the fam are on their way back from a trip to Yellowstone, Jakeem (with Thunderbolt in tow) is out lobbing newspapers (including onto The Shade’s doorstep)… Rick has re-buried Solomon Grundy (and apparently not for the last time!), and Beth’s parents are doting over their superhero offspring… Yolanda shoots some side-eye at Cindy, before the Dragon King’s kid helps an old lady across the street… and the Crock family is out for their morning run.

We then see The Gambler (aka Steven Sharpe) resurface in town aka his “home, sweet home.” 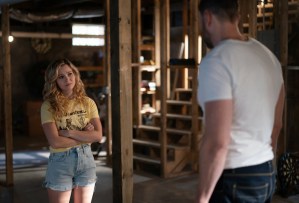 After a quick pan of recent newspaper headlines about a “mysterious glow”/”shooting star”/”unexplained light” (hmmmm….), Sylvester aka Starman welcomes the Whitmore-Dugans back home, where he has fixed up everything, cleaned out the basement (where his has been crashing) and even build a nifty display case for Cosmo. When Courtney privately questions him about his intentions for her/his Cosmic Staff, Sylvester offers the Reader’s Digest version of how he woke up in his own coffin, presumably “rejuvenated” once Court had formed her own bond with the staff. That said, he assures her — in this moment, at least — that he is done being Starman, and Cosmo is hers and hers alone to wield.

The Gambler stops by to inform OG JSA member  Pat that like the other “frenemies” in town, he too has had a change of heart, sparked in part by his quest to find the daughter, Becky, he put up for adoption long ago. Pat and Court are skeptical — after all, where was The Gambler when other adversaries showed up to vanquish Eclipso? — but he maintains his want for reform is sincere, seeing how his own abandonment by his father led him on “a bad path.” All the while, as this discourse plays out in the living room, we see that someone/something is “watching,” through some sort of hidden viewfinder….

The Gambler’s redemption tour next stops at the diner, where Richard Swift/The Shade finds his onetime colleague’s claims as unpalatable as the tea he was just served. The Shade warns The Gambler to get out of town before the townsfolk discover what he is actually up to — or, much worse, The Shade does. Driving home his point, The Shade’s eyes turn inky-dark as he orders the Gambler to “Go!” (Afterward, a curious Swift takes notice of the status of his powers.) Later, Crusher warns Pat about falling for The Gambler’s shtick, saying that his onetime ISA cohort was only ever in it “for the money.”

At the high school cafeteria, Courtney and Yolanda join Beth, whose parents are running supersuit swatches by her via C.H.U.C.K. Rick arrives to report that he has been burying Grundy here, there and everywhere per The Shade’s instructions, to no avail. When Cindy sits down to create a quintet, Rick and Yolanda make clear to wannabe-inclusive Courtney that they never signed off on the ISA alum joining the JSA. 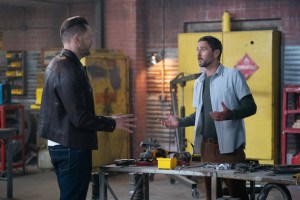 Hanging out with Pat at the Pit Stop, Sylvester raves about the robot that ol’ Stripesy built, and begs him to show it in flight. Sylvester in turn says he will grab Cosmo, to fly along. Pat begins to say something about his old friend commandeering Courtney’s staff, but Sylvester interrupts to thank Pat for giving him a place to stay and all. Later, in the basement, Sylvester explains to Courtney why he took Cosmo for a ride, saying that when he “came back to life,” he saw that there was no life for him to come back to, that the JSA and Starman had been his focus. When he insists that he will never ask for it back, Court suggests a “shared custody” arrangement, wherein he can use the staff when she’s at school. “Look out, world! Starman is back!” she half-heartedly cheers. 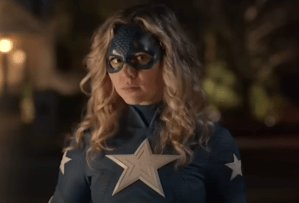 When Beth alerts Courtney to crime a-brewing, the JSA — Cindy/Shiv included — race to the scene, only to stand by and watch as Artemis Crock leaps into action and KOs the No Limits Gang members. “How’s that for an audition?” she asks while bounding off into the night, echoing that which her mom had told Barbara earlier, that her kid wants into the JSA. Afterward, while Cindy snarks about the JSA’s Pit Stop HQ smelling like a gas station, C.H.U.C.K. reports that the No Limits Gang used to work with The Gambler.

Later, The Gambler is inside his trailer home, finishing his letter to Becky, when someone hacks into his laptop to display the feeds from numerous hidden cameras around town — including one apparently perched right outside his trailer!  As he ducks outside, pocket pistol in hand, to find and remove the camera, he is attacked by something off-screen. The nearby JSA in turn  hears a gunshot, and when they race to the Gambler’s trailer, they find Cindy standing over a body, pocket pistol in hand.

Want scoop on Stargirl Season 3, or for any other show? Email InsideLine@tvline.com and your question may be answered via Matt’s Inside Line.