Tuesday’s series premiere — which clocks in at a brisk 21 minutes — opens with Alan, a therapist played by The Office alum Steve Carell, waking up in a strange bed in a dimly lit basement… and discovering his ankle is chained to the bed. He struggles to free himself, finding he can only walk a few feet in any direction, and screams for help, but no one responds. Plus, he sees a bedpan nearby, which means someone intends for him to stay there for a while. We flash back to Alan living his normal life, leaving a message for his daughter and having a session with a new patient named Gene (Domhnall Gleeson), a jittery young guy who insists on wearing sunglasses and a baseball cap while they talk. 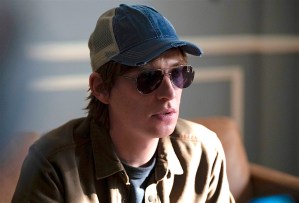 Gene says his dad beat him up a lot when he was a kid, and it “f—ked me up.” As a result, he has anger issues and trouble connecting with people. But he thinks Alan can help. Meanwhile, Alan has issues of his own: His wife recently died, and his relationship with his son Ezra (Andrew Leeds) seems strained. In another session with Gene, Alan lightly presses him to open up more; he can sense that he’s holding back. Gene insists he’s trying and even pounds his fist a little in anger, but he seems receptive to what Alan is saying. That night, Alan hears something rattling and goes outside to check on it — and then everything turns black.

He wakes up in that basement, chained to the bed, and he’s joined by… Gene, who tells him: “I’m so sorry. I know this sucks.” Alan demands to be let go, but Gene says he can’t do that. He knows they weren’t getting anywhere in therapy, so he thinks he can be more truthful here. First, he admits his name is actually Sam. Also, “I have much bigger problems than your other patients,” he reveals. “I have a compulsion… to kill people.” It’s not just a compulsion, either: He’s done it, more than once or twice, but he does want to stop. Alan promises he can keep all this confidential as long as Sam doesn’t tell him he’s going to commit another crime. “I am going to commit another crime,” Sam counters — but he thinks Alan can help him learn how to control these impulses. “I met with three different Jewish therapists,” he tells him. “I chose you.”

Give The Patient‘s series premiere a grade in our poll, and then tell us in the comments: Will you be booking another session?