During Samantha Morton’s stint as Alpha on The Walking Dead, we learned that the character was many things. Strong. Merciless. Cruel, even. But one adjective we’d have been hard-pressed to attach to her was tender. So you can imagine our surprise at discovering her softer side in her standalone episode of Tales of the Walking Dead.

Set a year after the Whisperers’ future leader killed husband Frank (read the recap here), Sunday’s “Dee” — also Alpha’s real name — found the widow and 9-year-old daughter Lydia living on a riverboat. Though fuel and supplies could be hard to come by, ringleader Brooke ran the place like it was Party Central, with fancy dinners, aerobics classes, the works. Naturally, Lydia was more enchanted with beautiful Brooke than her pragmatic mother. At one point, the kid even went so far as to tell Mom that she could just, you know, leave.

Dee wasn’t wrong about how foolish and freewheeling Brooke was, however. And soon enough, we discovered that Billy, the bartender who dissed Dee’s appearance early on in the hour, was, in fact, in cahoots with a bunch of other guys. Their plan? To kill off enough passengers so that they could take their places. 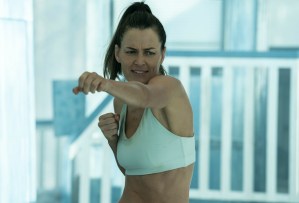 As the [bleep] started to go down, Dee made her escape with Lydia in a dinghy. Not that the shore was much safer than the riverboat. They were beset by walkers and had to hide under the slit-open corpse of one in order to keep from being eaten. When Dee spotted Brooke in the distance, she intended to have her revenge. “You promised my daughter the world,” she hissed, “and then you took it away.”

After Lydia intervened, Dee pointed her in the opposite direction and decided that death was too good for Brooke, anyway. So instead of kill her, Dee left Brooke with a deep scar running across her face. Finally, Dee found herself laid so low emotionally that she apologized to Lydia, genuinely and sorrowfully… for everything. This was no place for a child, Dee realized. She would’ve killed them both, had she not heard the “fairies in the trees” that Lydia had mentioned.

Hushed voices told Dee to spare the girl. And when at last she saw from whom those voices had come, they were… Whisperers. (Not sure quite how that tracks, seeing as when Alpha met Beta, she wasn’t yet a Whisperer, was she, and obviously, Beta wasn’t with her and Lydia here. Maybe someone smarter can suss out how this timeline is possible?) 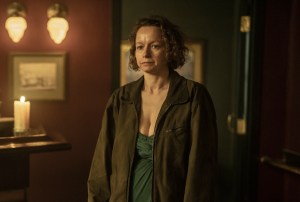 “I’m Meryl” — or something like that — said the group’s leader, removing her mask to reveal a head of blonde hair. Then, in a flash-forward, a bald Alpha explained that “I was keeping myself from my nature, but that… that was the end of Dee and the beginning of me.

“And then I met you,” she added, speaking to a skin mask with familiar-looking flaxen locks, “and you showed me love.”

So, what did you think of “Dee”? Would you be keen on another Alpha episode to further delve into her backstory with the Whisperers? Hit the comments with your questions and critiques.