This week’s Resident Alien was all about regret, grief and weight, and thanks to an emotional conversation with her father, Asta Twelvetrees finally found some solace.

In Wednesday’s episode, Asta (memories now in tact) struggled with the remorse she’s been carrying as a result of shooting a Galvan/Powell hoodlum dead. Despite taking some space from Harry and leaning on D’Arcy for support, Asta was still barely surviving until she found the comfort she desperately needed in her dad Dan (Reservation Dogs‘ Gary Farmer).

Early in the episode, Dan observed that his daughter looked like she was carrying “the weight of the world” on her shoulders, which in many ways, she was. Then when he saw Asta was past her breaking point, he kicked everyone out of the diner so the two of them could chat.

“Dan is a safe place to go where Asta can lay her head,” Sara Tomko tells TVLine. “He’s always there for her, so it’s nice that she can truly in this moment say, ‘I’ve got to tell you everything and you’re not going to believe me.’ He’s the perfect person to take that on. He says, ‘OK. It’s crazy, but I believe you and I’m here for you.’ It’s just another testament to show why he was the perfect adoptive father to raise her. He’s always the perfect candidate to be there for her when she needs pieces to be picked up.

“I imagine if you were to see Asta when the cameras weren’t rolling, she would just be like, ‘This is insanity! Am I alive right now? Is this really happening?’ Dan brings her back to reality and reminds her, ‘Yeah, you are alive. It is happening, and I’m here for you,’ which is really beautiful.” 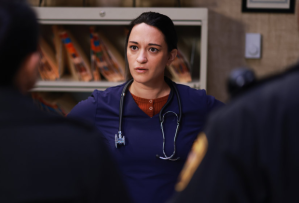 Dan even relates to Asta by sharing his war experience; he killed a few people himself while on duty serving the country.

Adds creator Chris Sheridan: “[Dan] relates to it in his own way and he’s able to find the silver lining which is, ‘It’s OK to feel bad about it. You’re supposed to feel bad about it because you’re human.’ And I love the sentiment that was put in here. It was largely why Zach Cannon, who wrote that episode, titled it ‘The Weight.’ No matter how hard things are for you, if you have a good friend or someone you love and you can open up to them, then it always feels better because that person is helping you carry that weight.”

Farmer proved to be the exact scene partner Tomko needed to handle such heavy, delicate emotions.

“Gary is just so charming and sweet and loveable,” the actress says. “I just love working with him as a person. We just relied on our instincts and listening to one another. When I work with him, I don’t feel nervous at all. I just feel safe and calm and comforted, and that’s what Asta needed that day, so it was perfect.”

“I think both of them played it so beautifully,” says Sheridan. “Sara and Gary have a lot of great chemistry together. Gary is such a warm, kind person and is such a father figure to everybody [on set], and it really comes across in the scene.”

In the rest of our conversation, Tomko shared additional thoughts on Resident Alien‘s sophomore season including what’s to come for Asta and Jay, and how Harry is (still) adjusting to humanity. Read the interview below.

TVLINE | After Harry wiped Asta’s memory, we were left with that heartbreaking shot of Jay waiting for an Asta who’d never come. What can you tease about the relationship between Asta and Jay?
TOMKO | When I read that in the script, I was so angry at [creator] Chris Sheridan. I was livid! She’s finally gotten her shit together, she’s finally said her sorries, she’s come out to her daughter, and Jay finally says, “OK, let’s take a step. One little baby step in the right direction,” and then Harry erases Asta’s memory and she’s not there. It is so upsetting!

It’s going to be devastating for Asta, more than it is for Jay, I would think, just because Jay’s used to being abandoned by Asta. So even though she’ll probably be pissed off, you get to a place of indifference, which is worse! So I think that Asta is going to have to not beg or grovel, but try to come up with a way she can speak to Jay about what happened without telling her exactly what happened, where she’ll hear her. I think there’s still some room left for an apology and some forgiveness, but whether Jay wants to truly let Asta into her life is up for debate. I can understand that she might not want to. I think Asta’s going to have to get to a place of acceptance. Like, ‘There’s nothing I can do to change it or fix it, all I can do is love you.’ Hopefully that will be enough, man, but I really don’t know! [Laughs]

TVLINE | We saw that Asta’s been writing Jay letters every single year and stashing them away. What were your thoughts on that when you first read the script?
They asked me write a few actual letters, and write the envelopes. I had so much fun with the props master making those. That scene where I’m just writing and you hear my voiceover is really sweet and meaningful, and I just remember thinking, ‘I can’t wait to do this voiceover and give it as much heart as I possibly can in the moment.’ It’s the only truth Asta has. It’s like journal entries. She’s been telling her daughter how she feels for years, she hasn’t been able to say it in person. I’m hoping that we get to see her finally do that in person. It was wonderful to see it, but she hasn’t given those letters to her yet, so I don’t know! I think that’ll be a beautiful moment if it gets to happen.

TVLINE | Harry confesses to Asta about the other alien race that is in Patience. After the memory wipe and everything going on, does she trust Harry 100 percent at this point?
No, no… [Laughs]. There’s going to have to be some trust built up. I think she ultimately sees through to his core and that’s why he cares for her so much. She sees to the core of who he is as an alien, even just as an entity in the world, and she sees that he’s ultimately good. 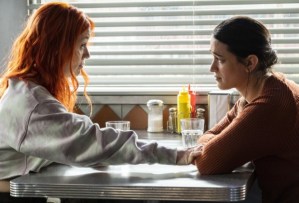 That’s where the whole story between Asta and Harry lies. Harry is maybe untrustworthy to other people and maybe even still untrustworthy sometimes to Asta because he’s not revealing everything he needs to reveal, but at the end of the day, Asta’s gut instinct says, ‘Yeah, I think I trust him.”

And that’s it! It’s a thin thread that’s holding humanity together! Just that thin thread of hope. It’s like Roulette. She’s like, ‘I’m putting it down on red. I’m hoping that heart is pumping. I hope it is on our side. I’m taking a bet on you,” because as an empath, she really does feel his energy and see through to his core, more than he even knows himself. That’s why they’re so good for one another. He keeps things even keeled and level, reminding her of honest truths. There’s no reason for him to lie to her, so there’s no reason for her not to trust him. But robbing her of her memories? That’s a pretty bold move. It’s invasive! That’s scary territory. It crosses a line that they’re going to have to deal with emotionally.

TVLINE | How in tune is Harry with humanity at this point?
The more he listens and gets to know the people of Patience, the more he starts to understand that being human is complicated and layered, and there’s not one box we fit in as a people. While that may be overwhelming to another species to meet us and be like, ‘You guys are complicated, there’s a lot going on here!’ [Laughs] I think he’s also building confidence in himself by getting to know us. It’s beautiful to watch Alan learn how to be Harry and how Harry’s learning how to be human. It’s all happening at the same time. He’s realizing (or at least Asta will be able to teach him) that pain is an inevitable part of being human, but it is necessary. You can’t have the good without the bad. You can’t feel relief without pressure.

TVLINE | Episode 3 ends with General McCallister grabbing a drink at The 59. Is there anything you can tease about what’s to come in the season’s last five episodes?
I love Linda Hamilton. I finally got to meet her on one of the last days I was on set. She was coming and I was going, and we finally got to meet after three years of doing the show. She’s so lovely, inviting and warm. I think you’re starting to see General McCallister turn a bit. She was sort of a villain in Season 1, but because there’s this other alien race and because there’s people after her too, I’m hoping the reason Asta and McCallister meet is because they’re on the same team. That’s my hope! I don’t really know where it’s heading truthfully. Because of COVID protocol, we didn’t get to see each other’s work like we did in Season 1. Half of the show is me glued to the television like the audience being like, ‘Oh my god! I didn’t know that happened!’ I’m hoping she’ll become one of us, but I don’t know.

I can tell you there are lots of ups, lots of downs, a ton of laughter, definitely some tears, but as always, just a ton of fun with our cast. It’s worth seeing it through to the end. I think you’ll have some beautiful ties that come back together from the beginning of the season, and there’s also going to be things that keep you wanting more because that’s what we do best.