Sylvester Pemberton aka Starman has a dark tale to finally tell in this exclusive sneak peek from the DC’s Stargirl Season 3 premiere (airing Wednesday, Aug. 31 on The CW). 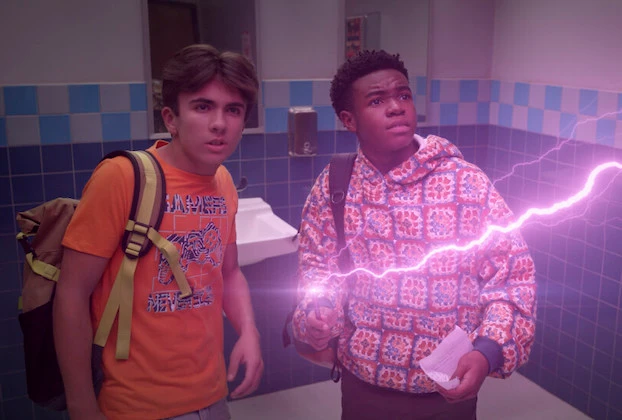 As chronicled in Stargirl‘s May 2020 series premiere, Starman (played by Joel McHale, now a series regular) was impaled by one of Icicle’s namesake weapons during the OG JSA’s epic, 10-years-ago clash with the Injustice Society. Starman soon after died from his wound, in sidekick Pat Dugan aka Stripesy’s arms.

It was Stargirl’s Season 1 finale that first suggested Sylvester was somehow alive, when the familiar face showed up at Pat’s old apartment complex in North Hollywood. McHale’s character proceeded to surface now and again throughout Season 2, eventually making it to Blue Valley in time for Stargirl & Co.’s showdown with Eclipso.

In the sneak peek above — from the “Frenemies” Season 3 opener, titled “The Murder” — Courtney (played by Brec Bassinger) broaches the topic of how Sylvester is now alive. He recounts the fuzzy details on how he came back to life, as well as shares his theory on why — Cosmo the cosmic staff’s possible role, included.

Bassinger in the TVLine video Q&A below said that Sylvester’s return till tee up “a very tricky situation, because obviously with Starman back, who will the staff go to? Who will the staff listen to?” In fact, she shared, Cosmo will wonder same! “It’s like when a dog has two owners and he wants to choose a favorite, but he doesn’t know which one,” Bassinger said.

Sylvester’s ongoing presence in Blue Valley will also stir up the paternal feelings Courtney once felt for the fallen superhero she assumed to be her dad.

“There’s also this struggle because Courtney at one point thought Starman was her dad, so she really looks up to him in this father figure role. But will he be able to do that, and do what she expects of him?”