I was pleased to see that The Americans masterminds Joe Weisberg and Joel Fields were teaming up again to create the new psychological drama The Patient, and that Steve Carell had signed on to star. But the moment that really made me happy? When I saw that the premiere episode was only 21 minutes long. (I may have actually muttered “Hallelujah” under my breath.)

In this era of Too Much TV, every minute is precious, and it’s a blessing to see a drama decide to tell its story economically, rather than bloating every episode out to an hour-plus with unnecessary subplots. And indeed, The Patient — a FX production debuting Tuesday, Aug. 30 exclusively on Hulu; I’ve seen six of the 10 episodes — uses the half-hour format to great effect, keeping the tension coiled agonizingly tight as it explores its killer premise, aided by a pair of powerhouse performances. Be careful what you wish for, though: In some ways, The Patient‘s unique format may be more of a curse than a blessing. 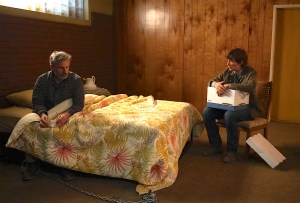 The premiere hits the ground running, with Dr. Alan Strauss (Carell), a therapist still reeling from the death of his wife a few months earlier, waking up to find himself chained to a bed in a sparse suburban basement. He’s being held captive by Sam (Domhnall Gleeson), a sullen young patient of his who wasn’t opening up much during their regular sessions. “I wasn’t getting anywhere in therapy,” Sam explains, but here, in his basement, he can tell the truth: “I have a compulsion to kill people.” He’s done it a few times already, in fact, and he wants Alan to help him stop before he does it again.

It’s a riveting setup, and the writing digs deep into Sam’s complicated psyche to find the twisted humanity underneath. He sounds almost reasonable when he talks; like he says himself, he’s not deranged, like a killer in the movies. (He’s a quirky guy: a bit of a foodie, bringing Alan exotic takeout dishes to eat, and a huge Kenny Chesney fan.) After some early resistance, a captive Alan eventually sits down and listens to Sam as he tries to make sense of his unspeakable urges. (He sees himself as an avenging angel dispensing karmic justice: “Every one of them deserved it.”) Alan has to tiptoe on eggshells, careful not to set Sam off while trying to keep him from killing again — and looking for a way out before it’s too late. 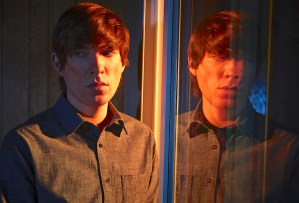 We get a few flashbacks to Alan’s earlier life — he’s estranged from his Orthodox Jewish son Ezra, played by Barry‘s Andrew Leeds — and some very questionable parenting choices from Sam’s mother, played by Linda Edmond. But The Patient is essentially a lean and mean two-hander, like a particularly bloody season of HBO’s In Treatment, and Carell and Gleeson are both excellent. Carell is a long way from Michael Scott here, sporting a thoughtful beard and head of gray hair. But we’ve seen him do stellar dramatic work in movies like Foxcatcher, and he plays Alan’s alternating fear and empathy as a delicate balancing act. Gleeson is better known for more cheerful roles like the sweet rom-com About Time, but he’s chilling as Sam: dead-eyed and ready to snap at any moment, twitching and fidgeting with barely contained rage.

Weisberg and Fields established themselves as masters of slow-burn psychological drama on The Americans — they write every episode here — and they seem to delight in torturing us. (At one point, a beeping phone that needs to be charged adds an extra layer of jittery drama to an already tense scene.) The half-hour format helps keep the pace brisk, and several episodes leave us dangling with huge cliffhangers. At times, though, the format almost feels too choppy, cutting to black just when things are getting good. The weekly format may be a problem, too: It’ll be tough to wait a whole week to get resolution, so this may be better consumed all at once as a binge. But maybe these complaints are actually compliments: Weisberg and Fields leave us wanting more. No matter how you watch it, The Patient is high-level drama told with admirable efficiency — all killer, no filler.

THE TVLINE BOTTOM LINE: Hulu’s psychological drama The Patient keeps the tension high with a half-hour format and delivers a pair of superb performances.