HBO has to walk a very fine line with its new Game of Thrones prequel House of the Dragon: First, of course, it has to bring back all the viewers who made Thrones such a smash hit for the network, but it also has to win back disgruntled fans who were sorely disappointed by the way Thrones ended. The expectations for this show are so high, they’re nearly suffocating, and it’s a relief that Dragon — premiering this Sunday at 9/8c; I’ve seen the first six episodes — mostly rises to the challenge, taking us right back to the world of Westeros with a familiar blend of graphic violence and political scheming. (Plus, a lot more dragons.) There are some nagging concerns, though, that keep it from fully taking flight. 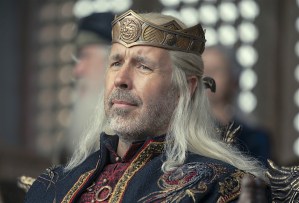 The prequel takes place two centuries before Game of Thrones, when Daenerys Targaryen’s ancestors ruled Westeros with a fleet of dragons at their disposal. (17 of them, to be exact.) King Viserys (Paddy Considine) sits on the Iron Throne — and his own ascent wasn’t without controversy — but when tragedy strikes, he is forced to choose an heir: his unruly brother Daemon (Doctor Who‘s Matt Smith) or his teen daughter Rhaenyra (Milly Alcock). His decision leads to serious rifts between friends and family members — and as we learned many times on Game of Thrones, the issue of who rules the realm is never quite settled, is it?

Showrunner Ryan Condal and director Miguel Sapochnik (a Thrones veteran himself) do a great job of bringing Westeros back to life, with all the savage brutality, harsh cynicism, rampant nudity and vicious power grabs we’ve come to expect. There are some truly vile sexual dynamics at work here, too, as young girls are shoved into the arms of much older men in an effort to consolidate power, along with a heavy hint of incest. (They are Targaryens, after all.) The story touches on timeless themes of loyalty, greed and jealousy, with a number of intriguing conflicts already brewing. Rhaenyra and her childhood friend Alicent, played by Emily Carey, see their bond strained by the whims of men, but all of the women here are at the mercy of a rigid patriarchy — a concept that gets repeatedly drilled into our heads with all the delicacy of The Mountain crushing a skull with his bare hands.

Dragon‘s unhurried pace is a sticking point, though. The initial episodes take their sweet time getting established; the first two episodes could easily have been combined into one. It’s also narrower in scope than its predecessor, focusing primarily on the Targaryen clan and their allies at court. Now a narrow focus isn’t necessarily a bad thing; The Mandalorian found a lot of success in reducing the vast world of Star Wars down to a lone bounty hunter and his adorable companion. But Dragon‘s action takes place almost exclusively inside the halls of power, hermetically sealed away from the grit and grime outside the confines of King’s Landing, which makes it feel claustrophobic at times. Game of Thrones boasted a colorful tapestry of characters from all walks of life; this series is monochromatic by comparison. (Maybe it’s just all the long blonde extensions everyone is wearing.) 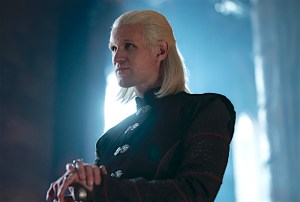 The cast is stocked with standout performances, highlighted by Alcock, who is captivating as young Rhaenyra. (It’s easy to peg her as a mini Daenerys, but Alcock brings a distinct inner fire all her own.) Smith is equal parts charm and cruelty as brooding brother Daemon, and Rhys Ifans gives off major Littlefinger vibes as Otto Hightower, the calculating Hand of the King. Considine is a tad overheated as Viserys, though, and Emma D’Arcy and Olivia Cooke, who play the adult versions of Rhaenyra and Alicent and are being touted as the series’ stars, strangely aren’t even introduced until the sixth episode.

In fact, House of the Dragon takes a number of confusing leaps through time, jumping forward a few months one week and then a few years the next and then a decade (!), which makes it hard to find our footing, story-wise. The pace does pick up in later episodes with a number of shocking twists, but it all feels like prologue to a main story that has yet to get started. I’ll definitely keep watching, though, to see where it goes, and it’s a major achievement that House of the Dragon manages to recreate so much of what we loved about Game of Thrones. But it doesn’t have that same spark of magic, at least not yet.

THE TVLINE BOTTOM LINE: Despite a deliberate pace and narrow scope, HBO’s House of the Dragon proves itself a worthy successor to Game of Thrones.