Not since Big Brother 23‘s Frenchie was in power has there been a Head of Household reign as chaotic as Taylor’s this week.

On paper, this week should have been uncomplicated for Taylor — the kind of easy, breezy week she had surely earned after enduring a hellish start to the season. But instead of limiting her nomination options to only those outside the Leftovers alliance, Taylor 1) toyed with the idea of putting at least one of her own allies (Turner, in this case) on the block initially, 2) considered nominating her close friend Joseph (?!) as a replacement pawn who would surely get evicted in the end, and 3) used the verrrry thin argument of a swiped trip to London as justification for perhaps targeting Alyssa. A mess!

But as Taylor’s week of power came to an end on Thursday night, the houseguests’ strategies were further upended by a brand-new twist that turned this one game of Big Brother into two for the next seven days. Read on for the highlights of the two-hour episode:

THE VETO MEETING | At the end of Wednesday’s hour, Michael hinted in the Diary Room about the “inevitable destruction and implosion of The Leftovers,” and with Kyle now in possession of the Power of Veto, it seems that implosion has been moved up several weeks to… right now. In short, he’s not down with backdooring his own showmance, and he doesn’t think Alyssa’s theft of Taylor’s London trip is a particularly good reason to get Alyssa out.

There’s a lot of annoyed Diary Room sessions on Kyle’s part, and a lot of Leftovers group meetings where no one really wants to call Kyle out for having more loyalty to Alyssa than to his own alliance. In the end, it’s anticlimactic: The Leftovers decide as a group that nominations will stay put, and Kyle indeed chooses not to use the veto at the next day’s meeting. (In one of the season’s weirder moments, though, Taylor pretends to be angry with Kyle’s decision and yells, “You were supposed to use the f—king veto!” at him in the storage room afterward for dramatic effect. Jasmine and Alyssa fall for the theatrics, at least, but it’s an odd choice on Taylor’s part.) 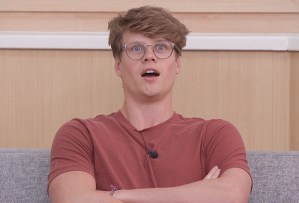 But here’s something we can file under Expect the Truly Unexpected: Big Brother actually does dedicate a segment to Kyle’s troubling rhetoric of the past week; he has strongly implied on the live feeds that he’s worried about the house’s BIPOC contestants joining forces and evicting the white players, and he’s been warping the mission statement of last season’s historic Cookout alliance to insinuate that this season’s contestants of color will inevitably all align. If you’re attuned to Big Brother Twitter at all, you likely saw #StopProtectingKyle trending earlier this week as feed watchers grew frustrated with Big Brother‘s edits for the primetime broadcasts, which seemed to conveniently exclude Kyle’s concerning comments.

During Thursday’s episode, though, we see Michael and Brittany debriefing after a strategy chat with Kyle, and they agree they’re not comfortable with the “optics” of two alliances that are based — even if subconsciously — on race. (Kyle had begun to feel “bullied” by Taylor, Monte and Joseph when they wanted him to use the veto, prompting him to suggest targeting that “loud” trio sooner rather than later.) Brittany takes her concerns directly to Kyle, too: “If that ends up being the sides [white contestants versus BIPOC contestants], I can’t do it,” she tells him, to which he puzzlingly responds, “It’s just such a fine line after last season.” Urging him not to go down this very worrying road, Brittany counters, “We just can’t assume that would be the case, though,” and Kyle gives a noncommittal response. (Well, they addressed it, at least…? Were you pleasantly surprised by even the acknowledgment?)

THE EVICTION | After giving us more filler than even a season of The Kardashians could, it’s at last time for the eviction: Indy is booted in a 7-1 vote, with only Michael throwing her a sympathy vote. In her post-game interview with Julie, Indy blames not Taylor, but Kyle for her eventual eviction, citing his decision not to use the Power of Veto to save her as the reason she’s now outside the house.

THE TWIST | And then, finally, Julie is able to reveal the Split House twist to the remaining contestants, who are absolutely floored to hear that two separate-but-simultaneous games of Big Brother will be played this week. Here’s how it will work: Five houseguests will live indoors at the Brochella music festival all week, while the other five will live in the backyard (!) all week at Dyre Fest. Each group of five will have one Head of Household and two nominees, while the pair that isn’t on the block come Thursday night will cast that group’s only two votes; next week’s episode, to that end, will be a double eviction as each side loses one player.

The HOH competition is a knockout-style contest, with pairs of houseguests facing off to find a “VIP” sign in pictures of packed music festival crowds until only two people are left standing. Michael, as the actual champion of the game, will get to live indoors at Brochella as that group’s Head of Household, while runner-up Terrance will serve as HOH for the Dyre Fest group outside. As for which houseguests will be on which team, Michael and Terrance will alternate choosing players for their groups, with Michael selecting first as the Brochella HOH — and we’ll have to head to the live feeds to see how those drafts play out.

OK, your turn! How do you feel about the Split House twist? Do you think The Leftovers will make it out of the week unscathed? Drop a comment below!