For The Bear‘s breakout star, Ayo Edebiri, the reaction to the Hulu (via FX) restaurant drama’s first course has been rather delicious.

For one, “It’s one of the first things that both of my parents have finished, so that’s really cool,” the actress, writer and comedian shared with TVLine this weekend at the HCA TV Awards. “Also, going to eat at restaurants has been pretty fun — there have been some free appetizers that have been really nice!”

On The Bear — which had an unceremonious eight-episode binge drop in late June — Edebiri plays Sydney Adamu, a CIA-trained chef who returns home to Chicago to offer her staging services to Carmen “Carmy” Berzatto (Shameless‘ Jeremy Allen White), a James Beard Award-winning chef who is laboring to upgrade The Original Beef of Chicagoland, a run-down eatery owned by Carmy’s late brother Michael.

It is not easy going for Syd, Carmy and the rest of the staff (comprised of gruff Tina, aspiring pastry chef Marcus and Michael’s obnoxious best friend Richie). In fact, heading into the season finale, Sydney — for a variety of reasons we won’t spoil here — makes a bold decision that briefly called into question her future with The Beef. (“That definitely felt like a moment where I was living out a few fantasies!” Edebiri said with a laugh.) 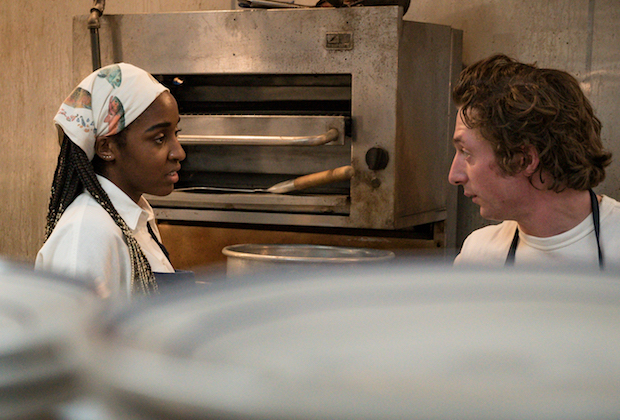 The Bear was renewed about a month after its release. And Edebiri is among the many whose appetite has been whetted for its second course.

“I love the writing on the show so much,” she avowed. “I think the writers room, which is run by [series creator] Chris [Storer] and Joanna [Calo], is full of geniuses, so wherever they go, I’ll follow.

“I think it’ll be really exciting to see the crew of The Beef, now The Bear, go into another business venture instead of fixing the problems and paying off debt,” the actress added. “I’m excited for the very ridiculous things I am sure will ensue because of that.”

One twist that Edebiri does not expect to see happen, however, is the leaning into anything romantic between Sydney and boss man Carmy, despite their clearly shared passion for the impossible task of creating fine dining.

Want scoop on The Bear Season 2, or for any other show? Email InsideLine@tvline.com and your question may be answered via Matt’s Inside Line.