Warning: This story contains major spoilers from For All Mankind‘s Season 3 finale — proceed at your own peril

Another For All Mankind season has ended in tragedy.

The Apple TV+ drama’s Season 3 finale served as a farewell for original cast member Shantel VanSanten, whose character, Karen Baldwin, perished in a domestic terrorist attack engineered by Jimmy’s conspiracy theorist cronies. The bomb blast at Johnson Space Center also claimed the life of Sonya Walger’s Molly Cobb, who had been sidelined for much of Season 3 following her NASA firing in Episode 2.

For co-showrunners Matt Wolpert and Ben Nedivi, the decision to kill off VanSanten — whom the former describes as “the heart and soul of our For All Mankind family” — was particularly wrenching.

“The arc of Karen Baldwin, really more than any other character on the show, is such an epic arc, from astronaut’s wife to a small businesswoman to a sort of titan of space industry,” notes Wolpert. “But in terms of [her death], we really wanted that bombing to have a dramatic, emotional component. And Karen’s death felt like the best way to bring that about… To have her [life] unceremoniously cut short heightens the tragedy.”

Regarding the death of Walger’s Molly, the EPs saw an opportunity to give the exiled NASA icon an honorable, heroic discharge. “The moment of her walking down the hallway and disappearing into the smoke and sacrificing herself to save other people… felt like the perfect way to capture Molly’s death,” explains Nedivi. “And [renaming Johnson Space Center] after her [in the flash-forward] felt like a fitting tribute to someone who had singlehandedly changed the program.” 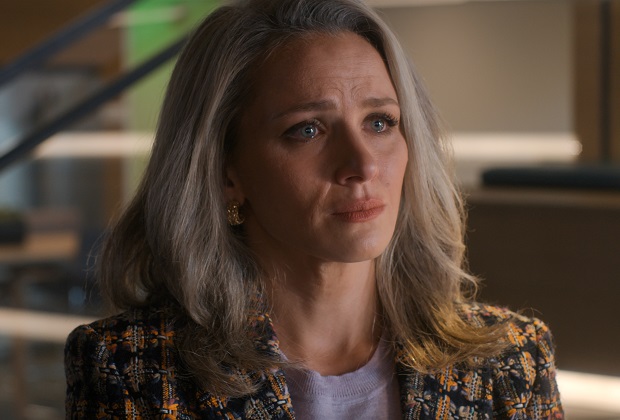 However, it’s Karen’s death — and VanSanten’s subsequent departure — that will arguably come as the bigger shock among fans. It’s for that reason that TVLine rang up the actress to get her take on her alter ego’s demise and more (including, yes, her opinion on a certain polarizing May-December storyline).

TVLINE | How far in advance did you know that Karen was going to die in the finale?
I emailed Matt and Ben around Episode 7 or 8 and I said, “We should talk.” And Ben wrote me back the next day and was like, “You instinctually knew, didn’t you?” And I was like, “I’m dying, right?” And he was like, “Yeah.” And he said they literally made the decision when I sent the email.

TVLINE | What was your reaction?
It’s very bittersweet. We always knew signing on to the show that, with time jumps, the baton would be passed and new characters would come in and take over. It’s this beautiful evolution of life… Last year there was a lot of letting go [for me]. As an artist it’s what we constantly have to do. And I never hear people talk about how hard it is as an artist to let go of something you have put your whole soul into. And I didn’t expect to. This show and Karen snuck up and surprised me… I love our show. And I love the people. And I love Karen. And I love the world we created. I’m heartbroken that I’m gone. 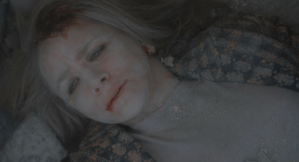 TVLINE | Did you really get a premonition that Karen was going to die in the finale?
I usually do. [Laughs] It wasn’t anything to do with the story. It was an instinct. But I feel like that every season. “Where is there to go? Everybody is going into space!” And then we started this season and all of a sudden Karen’s in space at her hotel and I’m like, “What?!” I never could have envisioned so many different iterations of where my character was and her own evolution. I could come up with a million stories I would still want to tell of Karen, but sometimes loss, as we’ve learned in Episode 1 of our show, propels story and humans forward. And it’s how our show works… This was her swan song. She finally understood who she was as a woman. She was settled. And happy. And living the best version of herself for once.

TVLINE | Are you curious what’s going to happen in Season 4?
I was texting with [co-stars] Krys [Marshall] and Cynthy [Wu] this morning as they’re getting ready to start Season 4. I’m like, “Tell me everything. What are the sets like? What are you wearing? What do you look like as we jump ahead? Tell me!”

TVLINE | You were part of what will likely go down as one of the series’ most polarizing storylines. What did you think of the Danny-Karen-Ed quasi-love triangle? Did you love it? Hate it? Something in between?
I didn’t hate it. I understood it. And that was the most important thing for me — to sit back and understand where Karen’s mind was. And to not judge it, because it was part of her journey… At first it was shocking. [Laughs] I didn’t want it to happen. I don’t think anybody goes into an affair thinking it all the way through. [But] it was a catalyst for Karen to find herself…  Of course it’s polarizing. Making huge mistakes and having affairs — those things are really polarizing. And I don’t mind them starting a conversation. And I don’t mind Karen being human. I just didn’t want that choice to live on through everything and color everything in her life. And for her it didn’t. For Danny it has… I was so grateful for the scene between Karen and Jimmy [because] we never really got to understand [Karen]’s honest human perspective. And the show does a really beautiful job with those moments of reckoning and healing, in between the drama and the sci-fi and the Mars. (Additional reporting by Vlada Gelman)

For All Mankind fans, what did you think of the season ender? Grade it below, then hit the comments!