For nearly three years, it seemed unlikely that So You Think You Can Dance would ever return — and once it did, the show arguably wasn’t the same.

The early weeks of Season 17 blew through audition and choreography rounds at a breakneck pace. The performance shows were pre-taped instead of live, and the only voters with any agency in weekly eliminations were those in the studio audience. And, of course, the season’s biggest headline was Matthew Morrison’s abrupt exit as judge, with Leah Remini (?!) stepping in as his replacement.

So, it was an odd cycle, and the jury’s still out on whether SYTYCD will be back again at all. But despite those creative hiccups, Season 17’s last dancers standing — Keaton Kermode and Alexis Warr — felt like the correct Final Two, and either one of ’em were worthy victors heading into Wednesday night’s finale.

Before the winner could be crowned, though, Alexis and Keaton had one last marathon of dancing ahead of them, as they were each tasked with delivering four more (!) performances ahead of the studio audience’s vote. That, unfortunately, left no time for any reprises of this season’s most memorable routines, which is honestly the highlight of any SYTYCD finale, but alas. (Surely Alexis and Keaton would have reprised their “Rome” contemporary anyway, so this was the next best thing!) 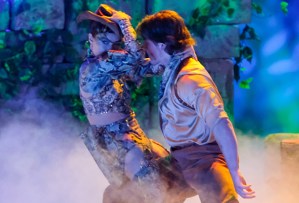 First, the finalists performed in their own styles — ballroom for Alexis, contemporary for Keaton — alongside a Top 12 contestant of their choosing. Alexis gave us a fire samba with longtime friend Carter, while Keaton’s contemporary brought the revelation that he and Top 12-er Anna started dating at some point during the season. Aw!

Up next, Alexis and Keaton danced outside of their styles with an All-Star: For Keaton, it was a good-not-great hip-hop next to Season 14 winner Lex Ishimoto; for Alexis, it was a gorgeous contemporary with Season 5 contestant Jason Glover, he of the iconic necklace routine with Jeanine Mason back in the day.

Our Final Two also performed together one last time — a jazz in which Keaton played a treasure hunter, and Alexis was the sultry snake guarding the loot — and took the stage for one solo each. Whew.

But at the end of the hour, it was time for the studio audience to do its thing, and the winner was revealed to be… Alexis! Tears, hugs and confetti all around — plus, Alexis became the first female SYTYCD winner to specialize in ballroom. If the show ultimately ends with this 17th season, that’s as good a note as any to go out on, no?

Your turn, SYTYCD fans! Happy to see Alexis win? Grade Season 17 in our poll below, then drop a comment with your thoughts on the finale!