Resident Alien returned Wednesday with its Season 2, Part 2 premiere, but there was no time for the gang to relax with Law & Order reruns and pizza: Harry and Asta had a dead body (and a speedy li’l alien baby!) to contend with.

So what’s the latest on Galvan/Powell’s nefarious plans and with whom did General McCallister start an unlikely alliance? Let’s recap all of the deets!

We pick up in the aftermath of Asta shooting Galvan/Powell goon Tanner Corrington. Having heard gunshots, Sheriff Mike appears shortly after, but thanks to D’Arcy’s quick thinking, she’s able to lure him away from the scene of the crime. But two more G/P baddies are on a boat nearby, and they saw everything. However, it doesn’t look like they’re going to be a problem thanks to the alien baby, who helps cover Asta’s tracks by biting their faces off and tackling them to the murky water. RIP?

Harry and Asta lie to D’Arcy, telling her that the guy Asta shot was the man responsible for Sam Hodges’ death. And he knew that they knew, so he followed them back from New York to kill them. She buys the story. But almost being killed shakes Harry right down to his extraterrestrial core. For now, he decides to push those feelings of fear deep down inside, and ignore them. I don’t see how that can possibly backfire!

D’Arcy finds motel keys on the body, and concocts a plan to dump Tanner in a hot tub on the premises. They’re also going to frame the dead guy for Hodges’ murder in the process. While D’Arcy distracts Judy at the motel’s front desk, Harry and Asta successfully place the body in the tub. The next morning, Judy finds him floating in suds.

Meanwhile, Logan is alive! After having been shot and torpedoed off a bridge, he wakes up by the river bed, silver alien orb in hand. McCallister comes to collect him, and since Logan really has no other choice, the two scamper off into the woods. 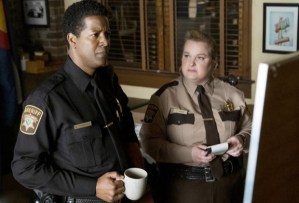 Sheriff Mike and Deputy Liv begin following the Galvan/Powell names they found in Sam’s office. Liv guesses that maybe they had something to do with Sam’s death and writing the names down was his insurance policy. Will they ever get close to figuring this one out?

Harry accepts the town doctor position again, just as Judy calls the dead guy in. When Mike, Harry and Ben arrive at the motel, Judy confirms there aren’t any cameras around. Liv pieces together that the dead guy was Tanner Corrington, one of the names on Sam’s list. As Harry feigns surprise, Mayor Ben secretly reports the murder to the neighboring town’s police department.

Asta, still reeling over what she’s done, goes to see D’Arcy at the bar. With a little help from her friend (and some whiskey), she settles down a bit, but clearly this guilt is going to haunt her for the rest of the season.

Mike and Liv continue working the case, but with no weapon and no gunshots heard, it’s a tricky one. Detective Lena Torres shows up from the Jessup P.D. and takes over the case, which doesn’t make Mike too happy. Jessup eventually commandeers the body at the hospital, which could put a wrench in Harry’s efforts to protect Asta.

Remember the Alien Tracker? Liv records a message to include with the video clip she’s sending him. She wants him to come to Patience. After submitting, she sees that he’s currently on tour, and since creator Chris Sheridan confirmed it to TVLine, we know Terry O’Quinn will be stopping by soon enough. 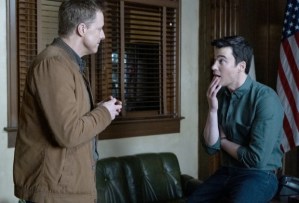 Meanwhile, Harry continues his search for the baby so he can get the rest of Goliath’s message about the other alien race on Earth. Ben interrupts, showing up uninvited for a guy’s night in with beers and “za.” Ben eventually gets drunk and passes out on the couch, so Harry hits the woods once again. He finds the shell from Tanner’s gun and throws it into the water. But the trauma from the gunshot still weighs heavily on him, despite repeating to himself that, “Everything is fine.” Elsewhere, the baby pukes up one of the dead guys’ wallets.

Logan is hiding out in a safe house, where McCallister tells him she thinks there’s a mole in her organization. She reveals that she found the alien ball under a floorboard after she drugged his food. (Crazy ol’ bat!) Since they both have a common enemy, she tells him they’re on the same side… whether they like it or not.

Despite the fact that Jessup confiscated the body for the autopsy, Harry is able to convince Lena to return it to Patience jurisdiction. But while they start the procedure, Asta runs out of the room. It’s all too painful for her. Harry knows he can erase all of her memories of that night for her… which he does. As a result, Jay is seen alone outside the diner, birthday balloon in hand, waiting for an Asta who has no memory of making plans with her estranged daughter.