The 1992 movie A League of Their Own shed light on an untold piece of American history, highlighting the women who played professional baseball in the 1940s while the nation’s men were fighting in World War II. (It still holds up, too.) Amazon’s new series adaptation — premiering this Friday; I’ve seen the first four episodes — aims to expand the movie’s storytelling canvas by addressing the LGBTQ repression and racial discrimination rampant in that era. It’s a noble effort… but that nobility doesn’t necessarily make it dramatically compelling. The new League of Their Own is a little too eager to make its point, sidelining the baseball elements and getting bogged down in heavy-handed subplots. While trying to right historical wrongs, it ends up losing the spark that made the original film so special. 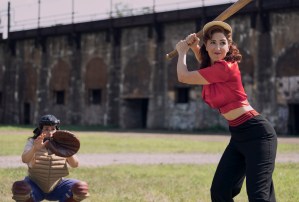 We pick up in 1943, with Broad City‘s Abbi Jacobson (also a co-creator here along with Will Graham) as Idaho bookworm Carson Shaw, who heads to Chicago to try out for a new women’s baseball league while her husband is overseas. On the way, she meets sassy glamour girl Greta (The Good Place standout D’Arcy Carden), along with an eclectic group of female ballplayers eager to prove themselves as they take the field for the Rockford Peaches. (The series follows a completely different set of characters than the original film, for the record.) The vivacious Greta stirs confusing urges in Carson, though, who pens a letter to her husband confessing that “there’s something wrong with me”…

The tone here is hard to pin down: It’s half goofy improv-style comedy and half earnest social commentary, and the two don’t always mix together well. The comedy is laden with anachronistic dialogue and jokes, too, that spoil the vintage vibe. Jacobson and Carden are both gifted comedians, but the arc of Carson and Greta’s forbidden romance is soppy and predictable. We may not have seen anything this explicitly gay in the original movie, but we’ve definitely seen LGBTQ storylines like this many times before. Plus, so much time is spent on Carson and Greta that the other ballplayers don’t get a chance to shine. There’s no dynamic here as strong as the complicated rivalry between the film’s sisters Dottie and Kit, and no one to challenge the girls like Tom Hanks’ reluctant manager Jimmy Dugan. (Nick Offerman should be a home run as the Peaches’ manager, but he barely makes an impression.)

SIGN UP FOR PRIME VIDEO to watch A League of Their Own, Lord of the Rings: Rings of Power and more! 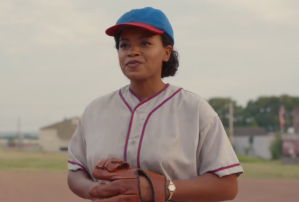 Then there’s Max, a Black pitcher played by Chanté Adams who’s not allowed to try out for the girls’ league, even though she has a better arm than all of them. Her storyline elaborates on a memorable moment from the film when a Black woman impresses Dottie by throwing back a ball, and Adams is a star in the making. But too often, it’s as though Max is on a different show altogether, stuck in a parallel storyline that’s awkwardly wedged in alongside the Peaches’ journey. She can’t play ball with the rest of them, so instead, she gets silly subplots like helping her friend chase all over town looking for crab (huh?) while also fighting to keep her baseball dreams alive. Like so much of this version of A League of Their Own, it sounds good in theory, but it just doesn’t work.

This show just needs more baseball, too — which is an odd complaint to make about something based on A League of Their Own. We only get about four minutes of baseball action in the premiere, and while we do get more in later episodes, the gameplay is marred by unconvincing CGI effects that makes the pitches and throws look like a video game. (It made me long for the authentic game action of the original, back before they CGI-ed everything.) There are some good performances here I wanted to see more of, like Gbemisola Ikumelo as Max’s bubbly comic book geek pal Clance and Dale Dickey as the Peaches’ gruff chaperone Sergeant Beverly, and I do appreciate the effort to highlight some of the stories the film didn’t tell. But the fun is conspicuously missing, and the muddled and labored end result is a far cry from the movie that inspired it.

THE TVLINE BOTTOM LINE: Amazon’s A League of Their Own tries to expand on the original film with socially conscious storylines, but it swings and misses.