Two Better Call Saul characters took two very different paths in this week’s penultimate episode: One finally came clean, and one decided to get even dirtier.

We open with Saul Goodman tossing a ball around his office while a lobby full of clients impatiently wait for him. He’s clearly avoiding something, and we learn what when he glances down at a stack of documents: It’s divorce papers from Kim. He finally calls Francesca and tells her, “Send her in.” And with that, we cut away to Kim’s post-Saul life as a brunette worker drone at a Florida sprinkler company. She makes potato salad for a suburban barbecue, then has underwhelming sex with her underwhelming boyfriend before they watch The Amazing Race. At work, she makes photocopies and does a quality check on sprinklers on the factory floor. It’s all pretty glum and boring… until a “Viktor St. Claire” calls for her. 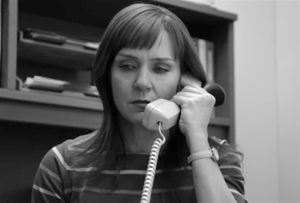 It’s Gene, and we see her side of his phone call from last week. He tries to make small talk and ask her how Florida is, but Kim stops him: “What do you want?” He just wants to catch up, he says, since it’s been six years now. He wanted to let her know he’s “still out here. Still getting away with it.” (He even brags about outsmarting the feds.) When he presses her to speak, she tells him to turn himself in: “I don’t know what kind of life you’ve been living, but it can’t be much.” He snaps at her, telling her to turn herself in and yelling at her until he softens, saying her name several times: “Kim… Kim… Kim.” She finally tells him “I’m glad you’re alive” before abruptly hanging up and heading to a coworker’s birthday celebration.

But Gene’s phone call sparks something in Kim, and she flies back to Albuquerque, stopping by her old courthouse — where she sees a young lawyer helping prepare her client, like she used to — before paying a visit to Howard’s widow Cheryl. Kim presents her with a full written confession: to pranking Howard with Jimmy, to framing him as a drug addict, to being there when Lalo shot him dead, to knowing his death was staged as a suicide. Kim tells a devastated Cheryl that Howard was simply “in the wrong place at the wrong time.” She tries to say that he didn’t suffer, but Cheryl scoffs at that, since his reputation was completely ruined. “I want to change that,” Kim says. Cheryl asks her why she’s doing this, and we don’t hear Kim’s answer. But once she’s back on the airport shuttle bus, she fights back tears until she finally explodes in loud, ugly sobs — ones she can no longer hold back. 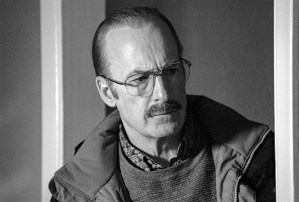 We cut back to Gene at the cancer victim’s house; he breaks inside, and the guy is passed out asleep on the floor. Gene takes photos of financial statements and finds the guy’s passwords taped underneath his desk lamp, and he starts to walk back out where Jeff is waiting in his cab… but then he stops and heads upstairs. He pours himself a drink and helps himself to a couple of the guy’s pricey watches just as a cop car pulls up behind Jeff, and when Gene checks on the cancer victim, he’s gone. Gene hides as the guy stumbles back inside and slumps down on the stairs, and Gene is ready to smash the guy over the head with a jar of his dead dog’s ashes… but then the guy passes out again. Gene quietly slips past him, but when he sees the cop car parked behind Jeff, he freezes. Jeff takes care of it, though: He puts his cab in drive and lurches forward, swerving into a parked car and drawing the cops’ attention as Gene sneaks away undetected.

Back in Saul Goodman’s timeline, a still-blonde Kim signs divorce papers in his office while Saul ignores her, playing on his phone. He asks her why she moved to Florida, but when she starts to answer, he cuts her off: “It doesn’t matter.” He teases her for not taking her share of the Sandpiper settlement, and when she finishes up, he brushes her off, dismissively telling her: “Have a nice life, Kim.” She walks out into his crowded lobby, and Saul’s next appointment is… Emilio, Jesse’s former meth buddy. (You know, the guy Walt and Jesse end up killing and dissolving in a bathtub full of acid.) Kim walks outside, where it’s raining heavily, and lights a cigarette, and a guy standing outside asks her for one. It’s Jesse! He recognizes her as the lawyer who defended his pal Combo in juvenile court and asks if Saul is any good, since Emilio picked him just based on his funny commercials. “When I knew him, he was,” Kim tells him before finishing her cigarette and walking back out into the rain.

Gene takes the bus home, and we see he kept two of the cancer guy’s watches. He gets a call from Jeff, who’s in jail. He calls Gene “Dad” and tells him he had a fender bender and got arrested because the cops think he committed a robbery, but Gene assures him they can’t have any evidence because Jeff didn’t steal anything from that guy: “I’ll have you out by lunchtime.” Then he calls Marion, who’s very upset that her Jeffy is in trouble with the law again. He got in trouble in Albuquerque, she says, and she’s still paying off the last bail bondsman. Gene offers to drive her to pick Jeff up and assures her they can just pay straight cash bail here in Omaha: “It’s not like Albuquerque at all.” Uh-oh… that answer seems to raise a big old red flag with Marion. 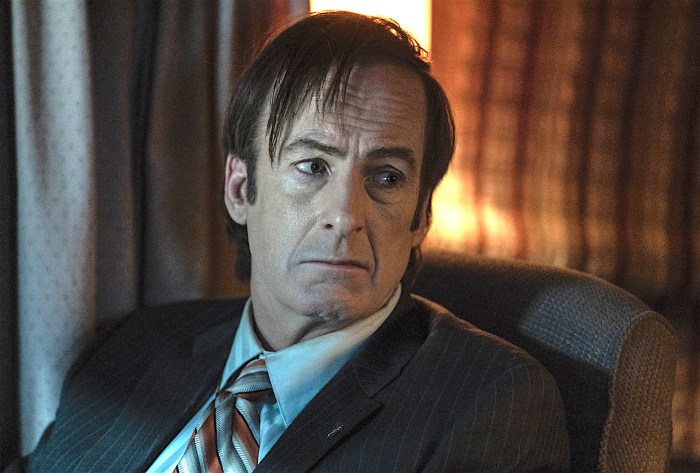 While Gene heads over to pick her up, Marion boots up her computer and does a little research. When Gene arrives, he finds her wearing headphones on her computer… and when she pulls off her headphones, he can hear his own voice coming out of them. Yes, she’s watching old Saul Goodman ads online: “Ask Jeeves told me. I typed in ‘con man’ and ‘Albuquerque,’ and up you popped, big as day.” He tries to claim it’s not him, but when she starts to call the police, he yanks the phone cord out of the wall. “I’m still the good friend you thought I was,” he tells her as he wraps the phone cord menacingly around his hands. She holds up her Life Alert necklace, and he warns her not to press it, finally grabbing it from her. “I trusted you,” she tells him, and he seems to soften a bit, dropping the Life Alert necklace — which allows Marion to grab it and press the button. “There’s a criminal standing in my kitchen threatening me,” she tells the Life Alert girl. “He’s a wanted man, and his name is Saul Goodman.” The Life Alert girl says she’s calling the police, and a panicked Gene runs out the back door.

Has time finally run out on Jimmy/Saul/Gene? Hit the comments and tell us what you think will happen (and should happen) in next week’s series finale.