Does Harper Stern have what it takes to secure Jesse “Mr. COVID” Bloom’s business for Pierpoint?

That’s the big question as Industry Season 2 continues barreling ahead. With the hedge fund manager having turned millions into billions during the pandemic, both Eric and Harper know that pulling in someone of that caliber could bank tens of millions for the firm. But is getting Bloom on board too much of a longshot for the young gunslinger?

In last week’s premiere (read a recap here; Episode 2 airs Monday at 9/8c on HBO), Harper made some inroads with Bloom after meeting him in the hotel she’s been shacked up in, and it didn’t take long for the two financiers to stop playing coy. Like a shark smelling blood in the water, Harper blew off an important meeting with Eric and Felim in order to hear Bloom speak and take notes on how she might possibly be able to pique his interest.

So will she be able to land a big sale, and what’s ahead for icy frenemies Harper and Yasmin? Below, creators Mickey Down and Konrad Kay talk to TVLine to tease what’s to come. 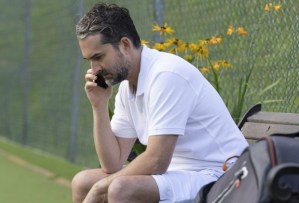 TVLINE | We can only assume things are going to heat up between Bloom and Harper. What can you tease about who Bloom is and where these two are heading?
MICKEY DOWN | Bloom basically did this enormous trade during COVID which has made him a little bit of a question mark in the industry. Basically the question is whether he knew what he was doing or whether he was talking his book, or whether he actually cared about the pandemic. So he’s trying to be a bit invisible. Harper’s already in game mode like, “I’m gonna try and snag this guy.” He’s not really looking for a new salesperson or coverage, and Harper basically pinpoints in him (or he’s pinpointing in her) is that the draw of a game is just too much for him to resist. It’s a weird analogy, but they’re two sort of junkies constantly feeding each other. Harper gives him a little bit of stuff, and he says, “OK, I’ve got it,” and he gives Harper some, and they build each other up to the point where it’s pretty bad.

We wanted it to be ambiguous about what he saw in her, and own the fact that she’s obviously an amazing salesperson and has knowledge at her fingertips at all times. And I think the audience will be thinking: Does he have a romantic interest in her? Is there something inappropriate going on here? But he’s post-success. He’s done everything. He’s done this huge trade, basically the trade of his life. The trade that made his name. Now he’s come back. He’s feeling a little bit existential, like everyone else of a certain age is in the show, and he’s thinking, “Maybe I can get that buzz that I felt when I first started this career through this younger person, and actually I can live vicariously through her new success.” He becomes a bit of an enigma and by the end, he reveals himself to be a bit more of a game player than we’ve imagined and a bit more of a shock. But yeah, Jay [Duplass]’s performance makes him very hard to pin down the first few episodes.

KONRAD KAY | Casting [Duplass] really helped the character because of his associations in his previous work. He actually said [recently] that he’s often cast in the feminine part. The empath. Super likable, super warm. It really helped us with our conception of [Bloom]. Eric actually says he has a checkered reputation. He sees it very quickly, and warns Harper against him, and you almost forget that the more you hang out with him.

The junkie analogy that Mickey used is really great, and it helped us in the writers room. We were like, “What happens when two heroin addicts get together and one of them is trying to recover and the other one is basically like, “I have the best junk that you’re ever going to try?” There’s no way you’re not going to try it. They’re weirdly able to be vulnerable with each other, but they have this part of themselves which is programmed to win effectively in the game that they’re playing. And his theory of life is like, “The reason I like financial markets is very gamified. My edge in it is I understand it, and I find it weirdly legible. The control I feel is when I’m winning and when I’m making money, and I’m basically useless if I don’t have that.” 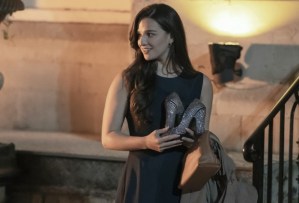 TVLINE | Harper and Yasmin’s friendship seems to have sadly crumbled. Are they going to be able to patch things up this season?
KAY | We wanted to honor that moment at the end of Season 1 where they have a big falling out, and then we had this natural hiatus in the universe of the story because of COVID. We didn’t want to make COVID a big part of the show, but we wanted everyone to have a very strong psychological reaction to it. So Robert is sober, Yasmin’s got loads of confidence from partying all the time and doing loads of coke, and Harper’s basically spent a year like a hermit in a room avoiding being in London on her own.

In the writers room, we talk about Harper and Yasmin as a love story. It’s obviously a platonic one, but it’s the center. It’s one of the central connections of the show, and a kind of “Will they, won’t they?” But the thing that Mickey and I love about the relationship is it feels like a very realistic friendship between coworkers which is sometimes connective and sometimes, it’s jealous. Yasmin wants to be taken seriously at work. She wants to be as clever as Harper. Harper is jealous Yasmin has privilege, and is jealous of the ease at which she moves in certain circles. People say “frenemy,” but we think of it more as a realistic coworking relationship, which is hard. Sometimes it feels contradictory and we may get quite impulsive sometimes in the way we write, but it always feels true to us.

We had a very good writer join our show in Season 2, the super Jami O’Brien, who ran her own show for AMC [NOS4A2]. She professionalized us as writers and definitely made us better traditional TV storytellers. It helped the show massively because the story is way more serialized and way more like, “Oh, I need need to see what happens next,” than Season 1 was.