Technically, we haven’t heard that the Grim Reaper will be making a guest appearance on Animal Kingdom before the end of the series’ sixth and final season. But Sunday’s “Clink” sure began to make it seem inevitable.

On one hand, we had Pope behind bars. The Codys had bought him protection on the inside from a guy on the outside named Finnegan. However, it didn’t do the prisoner a whole helluva lotta good, because he repelled help pretty much the way that Deran might a shave and a haircut. Before the hour was through, Pope had not only gotten stabbed in the gut — by a member of a gang affiliated with the Trujillos — he had retaliated against his attacker and gotten himself thrown in solitary with a mouthful of drugs.

Pope also wasn’t remotely interested in hearing that he could change his plea and get the original guilty one thrown out. He didn’t want either Lena or Amy to have to go through a trial. And “nothing happens to Amy… or Lena,” he barked at Deran. “Do I make myself clear?” 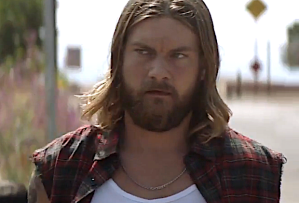 Pope had indeed made himself clear — so clear that J floated to Finnegan the idea of making a “different arrangement” — one that for $25k would get his uncle killed rather than protected. J didn’t pull the trigger on that idea, though. Not yet, anyway. By the end of the hour, Craig and Deran had decided that what they had to do was break Pope out of jail. And go on the run forevermore? Give up everything they’d built instead of just replace Pope and keep going? “It’s a family business,” grumbled Craig, “and there’s no family without Pope.”

IN OTHER DEVELOPMENTS… | With word spreading like wildfire that Pope was behind bars and Craig was high as a kite, the sharks started circling the Codys. After the Lightning Bolt board was stolen from Deran’s bar, he confronted Tommy. He hadn’t done it but admitted that people were putting two and two together. Cath had been missing, and it had turned out that she was dead. Adrian has been missing and… well… Yeah, Deran got the picture. People were pissed. 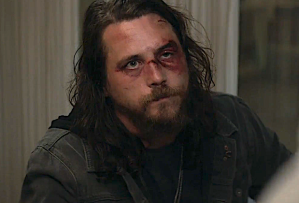 Following Pope’s stabbing, Smurf’s youngest son met with Tina Trujillo in hopes of putting the whole Pete-losing-an-eye thing behind their families. Fat chance, she said. Seemingly weak, the Codys were in the crosshairs, and it wasn’t just the Trujillos that were putting them there. Meanwhile, Vince took Craig to a kind of back-yard fight club for recovering addicts. It didn’t seem to knock much sense into his head, but it did have him seriously reconsidering Renn’s offer to move to San Antonio with her and Nick. Oh, and in 1992, Julia and Pope made up, and Smurf made Baz jealous by hooking up with a boy his age. OK, then. So, your thoughts? Will the Codys break Pope out of jail… or will J put his uncle on ice?