FBoy Island is a highly entertaining, deeply unserious show — and that’s why it’s so good.

The Season 2 finale was an amalgamation of everything we love about it, down to the funny but borderline cringe conversations (like Louise asking Benedict if he had a foot fetish after kissing her feet), emotional confessions and jaw-dropping twists. But would you expect anything less from an episode titled “The Men Have No Idea”?

Following the Mansplain — in which eliminated contestants shared their thoughts on the remaining men — during the penultimate episode, it was time for Mia, Tamaris and Louise to make their final choices.

For Mia, deciding between f-boys Danny and Peter came down to what she wanted and what she needed. And while Danny felt like the safer choice because he checked all the right boxes, she still yearned for Peter (who she’d been eyeing since Day One). 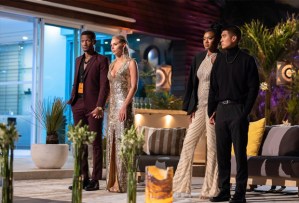 Meanwhile, Tamaris must choose between Casey, who competed in Season 1 as an f-boy but is now playing as a nice guy, and Niko, another nice guy who returned to the game in the penultimate episode after admitting he still had feelings for her.

Things were not clear-cut for Louise, who was still deciding between nice guy Benedict, who lacks the passion she craves, and f-boy Mercedes, with whom she shares a sensual attraction. The problem with picking Mercedes, though, was that she runs the risk of him ditching her and taking the $100K for himself.

But before all three locked in their final choices, host Nikki Glaser shared some game-changing news that even the men were not aware of: There’s a third option. Sure, they can choose a guy to split the money with or choose a guy who might keep it all for himself. But in the interest of “leveling the playing field,” the ladies can also dump both their men and take the prize money for themselves.

Here’s how it all turned out:

LOUISE | Louise chose Mercedes over Benedict. Luckily for her, Mercedes decided to split the $100K rather than take it all for himself.

MIA | When it came down to it, Mia couldn’t resist Peter and chose him over Danny. A heartbroken Danny, who revealed that he would have split the money, felt lied to “over and over again” but walked out with his “head held high.” As for Peter, the self-proclaimed reformed f-boy also chose to split the money. 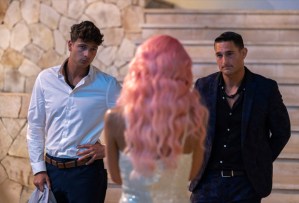 TAMARIS | In a shocking twist, Tamaris admitted that she came in as an f-girl, choosing to dump both Casey and Niko and take the $100K for herself. Remember when she said she had a difficult time letting people in? Or admitted that she has cheated before and “went through my f-girl phase”? Yeah, those were signs.

Both men, of course, were stunned by the reveal. “Damn… This is the worst. I feel miserable,” Niko said.

Casey added, “It’s just a lot… Just feel a little misled.” He went on to say that he had to give respect where it’s due because she “played the f—k out of me.”

Tamaris had no regrets about her decision, saying, “I’m sad that I had to let go of two great guys, because they are amazing guys, but I am happy I chose myself at the end of the day because that’s the only person I can ever depend on.”

What did you all think of that FBoy Island Season 2 finale? Grade the episode below, and let us know your thoughts in the comments.