Bones vet Emily Deschanel will tangle with the Devil in Ohio this fall, when the Netflix limited series premieres on Friday, Sept. 2. In addition to announcing a launch date, the streamer also released the featured first-look images. 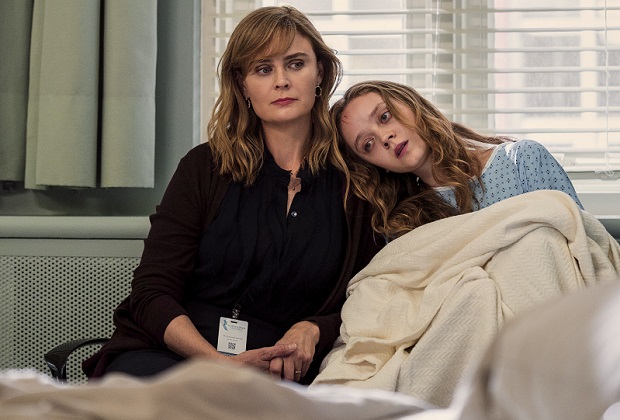 The eight-episode drama stars Deschanel as midwestern psychiatrist Suzanne Mathis, whose world is turned upside down when she decides to protect Mae, a fragile teenager on the run from a cult. “As Suzanne’s daughter Jules begins to suspect there’s more to Mae’s story, a series of incidents — seemingly brought on by Mae’s presence — leave the family in chaos,” per the official synopsis. “Soon the Mathis family is fighting for survival against a strange cult while Suzanne and a local police detective try to unravel the clues of Mae’s past and sinister happenings in the town she escaped.”

The cast includes Sam Jaeger (Parenthood) as Peter, Gerardo Celasco (How to Get Away With Murder) as Detective Lopez, Madeleine Arthur (TNT’s Snowpiercer) as Mae, Xaria Dotson (American Vandal) as Jules, Alisha Newton (Heartland) as Helen and Naomi Tan (Wednesday) as Dani.

* Anitta, J Balvin, Marshmello x Khalid and Panic! At The Disco are the first announced performers for the 2022 VMAs, airing Sunday, Aug. 28 on MTV.

* Peacock has given a series order to Hysteria!, a coming-of-age thriller that follows a group of 1980s high school misfits as they exploit the growing hubbub during the Satanic Panic. Matthew Scott Kane will write and executive-produce alongside directors John Francis Daley and Jonathan Goldstein.