The Orville‘s Season 3 mission came to a close this Thursday, with a finale that marked the space adventure series’ longest episode ever and would probably satisfy as a series finale. Or, do you want more? 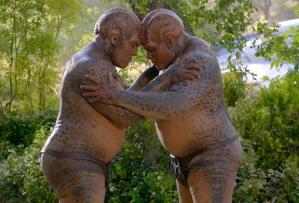 The aptly titled “Future Unknown” opened with a trip to Listak Two, where Bortus and Klyden participated in a Moclan ritual that would affirm their reunion as mates. The rules, simplified: After they both strip nearly bare, Klyden flees into the forest and hides, while Bortus gives chase. Once Klyden has been caught and “taken,” their union is complete. Afterwards back on the ship, Isaac calls up and ingests loads of data on human mating rituals, and then finds and surprises Claire with a big ol’ diamond ring and a marriage proposal. 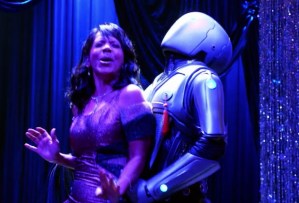 Claire chides Isaac a bit for the public display, then puts a pin in her response while she consults with Kelly, Tala, Ed (yes, Ed!) and her two sons. Isaac meanwhile gets scrutable advice from LeMarr, who says that the Kaylon may want to “sample” what else is out there before settling down with one woman. Claire tells Isaac “yes,” only to soon after discover that he solicited Kelly (and almost Tala) for sexual conjugation. Claire then rails at LeMarr for putting such foolishness into her fiancé’s head, after which we are officially heading for a wedding. 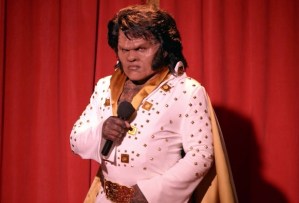 Isaac asks Gordon to be his best man, but Bortus interrupts to argue that he would serve just as well in the role. And despite Gordon’s protest, Isaac changes his pick. Claire meanwhile taps Kelly to be her maid of honor, and then gets to virtual dress try-ons. Later, the bachelorette party is a blast, full of dancing, good tunes and even a stripping, tassles-twirling “Kalylon,” whereas the bachelor party is a total dud, with Bortus-as-Elvis providing the sole entertainment. 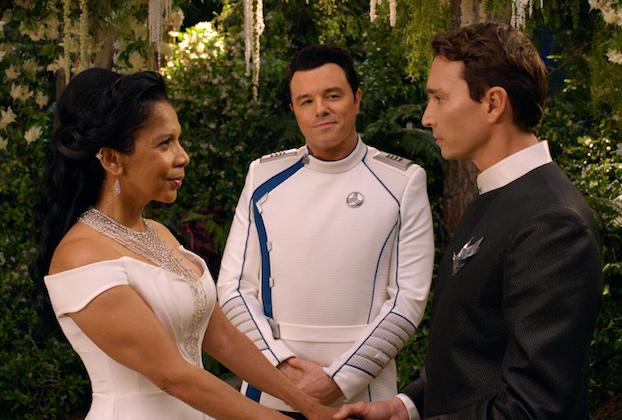 Held in a holodeck “forest,” the wedding goes off with nary a hitch, save for Isaac inviting not just Kaylon Primary but nearly the entire Kaylon fleet to attend. At the reception, former security chief Alara surprises Claire with an appearance, after which Bortus soundly fails with his best man’s toast. (He plainly lists the marrieds’ shortcomings, followed each time by, “All kidding aside.”) 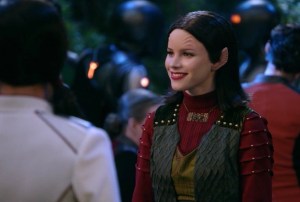 Isaac gives Bortus the hook, then invites Gordon to step in, and Gordon does winningly. Gordon then is invited to sing the newlyweds a song, and as he regales the crowd with a sweet, romantic tune, Kelly is moved to reach for Ed’s hand, resulting in shared, warm smiles at each other.

Elsewhere in the finale — and somewhat randomly? — Lysella, the barista from Season 1’s Earth-like Sargus 4, hails the Orville using a com-scanner, beseeching them to come collect her. With some reservations, they do so and learn that Lysella basically is seeking asylum from her sad, sad up/down-voting society. Ed and Kelly come around to agreeing, after which Kelly gives Lysella the 10-cent tour of the Orville and its many gizmos — including the matter synthesizer, which Lysella contends could save any number of downtrodden worlds. Kelly explains how they are legally forbidden to “gift” less-developed worlds with such tech, and insists that to do so would not have the desired outcome. Lysella decides to return to Sargus 4, but is caught trying to smuggle out a com-scanner loaded with specs of the matter synthesizer and such. Kelly uses the environmental simulator to prove to Lysella how a society not ready for future tech can be destroyed by it. Educated, Lysella agrees to stay aboard the Orville and become a part of its community.

What did you think of the very pat, non-twisty season (?) finale?