It’s the showdown every Sistas fan has been waiting for. And possibly dreading.

After showing up at Zac’s house last week in a desperate attempt to win him back from Fatima, Karen is about to find herself face to face with the woman in question — and TVLine has an exclusive first look at their tense encounter in tonight’s episode (BET, 9/8c).

And we do mean tense. Just look at the body language in the photo above. Karen and Fatima both look they’re ready to throw down, with Zac attempting to step in and keep them from tearing each other apart. But would Fatima really hit a pregnant lady, especially one claiming to be carrying Zac’s baby? Here’s hoping Zac doesn’t have any spare bats lying around. We’ve all seen what Fatima can do with one of those.

Of course, Fatima and Karen aren’t the only Sistas we should be worried about this week. Per the official logline for this week’s episode, “Sabrina gets entangled in a situation that could have serious consequences for her.” Could it have something to do with her new prince? Say-o it ain’t so, Bayo!

Check out one more shot from Karen and Fatima’s showdown from tonight’s episode below, then drop a comment with your thoughts on this feud. Does Zac belong with Fatima, or would you rather see him back with Karen? 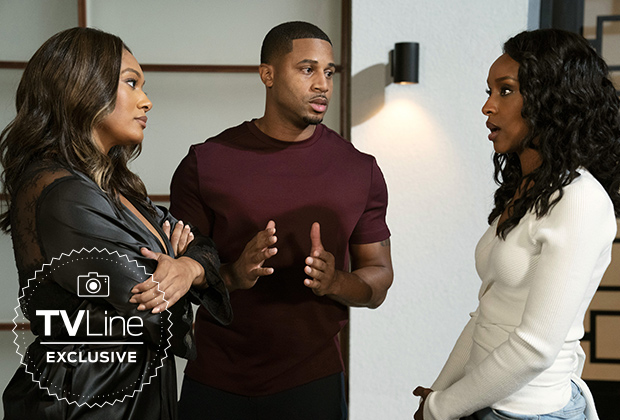