Last week on The Challenge: USA, we had the first major blindside when a duo of Big Brother players took a shot at one of their own. On Wednesday’s episode, it was the former Survivor castaways’ turn to get dirty.

While Derek and Cayla aim for the stars with their “Don’t get last!” plan, Ben shows concern that his relationship with Tyson on Survivor: Winners at War wasn’t quite ideal. And yep — this plays a huge factor into tonight’s strategy.

Tyson reminds us that Sarah and Ben both wrote his name down on Survivor, so he knows he needs to pull Ben in and make him feel comfortable. “If you bamboozle me, you bamboozle me,” Sarah tells Tyson nonchalantly after confiding that she trusts him completely. His reply: “I’m too old to bamboozle.” You’re fooling no one, Tyson.

DAILY CHALLENGE | In “Barreled Treasure,” partners will jump off a barge into water and swim 150 yards to buoys. Then they must memorize a code, swim to another cargo ship and search for the barrel with their code on it. Grab the puzzle pieces, swim ’em back, go out for another lap, then solve the puzzle. (OK, that sounds exhausting.)

While Leo instantly falls behind, Derek and Cayla are first to their code and first to snag their puzzle pieces. Cashay, meanwhile, opens up the wrong barrel, so she and Tyson must swim back to the buoy before trying again.

Leo and Enzo are having trouble with the swim, but Azah’s struggling even more. At one point, Leo’s holding on to Sarah like she’s some sort of dolphin or other aquatic mammal. Angela says if he was her partner, she would’ve drowned him. Can’t say we blame her!

The first two teams to the puzzle are Derek and Cayla, and Ben and Justine. But while everyone fusses to get it together, Tyson and Cashay come back from behind to win it all. 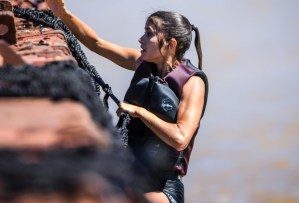 Azah starts quoting the Bible, but honestly, don’t we get enough of that from Julie Chen these days? Anyway, Sarah and Leo complete the challenge (barely), sending Cinco and Azah straight into the Arena.

DELIBERATION | Cinco tells Azah that he doesn’t want to name any names, since Cashay will undoubtedly use it against them. Since the losers don’t answer any of the winners’ questions, Tyson and Cashay agree to consider everybody.

With one Survivor and one Love Island player in the winners’ seat, Cayla and Derek are worried since they represent the other two shows. That’s when Cayla plants a very deliberate seed. She tells Tyson that his constant winning is bothering Ben. Sure, she’s hoping to save herself from elimination, but she’s also trying to make inroads with Tyson to build trust for the rest of the game. Did her plan work? Let’s find out.

THE ARENA | The losers hit the floor, and when it comes time for Tyson and Cashay to select the opponents, they choose… Leo and Sarah?! (Too old for bamboozling, huh?)

We then find out how it all went down. Tyson wanted to target Ben, but since he was partnered with Cashay’s girl Justine, Cashay wouldn’t allow it. And what does a Survivor player do when his target is “immune?” He targets that person’s ally: Sarah.

In “A Dark Turn,” players are tied together and must race into a shipping container to search for a stack of film reels. There are four different size reels. They must memorize the stack (in the pitch black, of course) and recreate it outside. 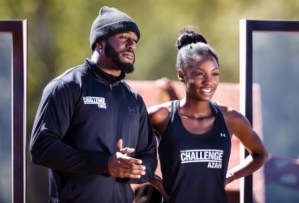 Sarah and Leo play it smart: They gather all of the different size reels first and feel them out. Then, they create a system that will help them identify each size once they’re in the dark. As they head into their container, Azah and Cinco come out and are already confused. Sarah and Leo, however, are feeling it. They’re calm, they’re collected and Sarah no longer wants to drown Leo in murky Argentinian water.

Sarah and Leo win the elimination, and she immediately starts staring Tyson down with her best Jack Torrance impression. Looks like Tyson’s gonna be in a bit of trouble next week. Let the fireworks begin!

Did Tyson take the shot too early? Should he have taken it at all? Fire away in the comments!