The following contains major spoilers from the July 28 episode of Hulu’s The Orville: New Horizons.

Charly had originally served aboard the USS Quimby, until its destruction by the Kaylon. In the aftermath, Charly joined the Orville as its navigator, where she made no secret about her POV on crewmate Isaac — especially since the scores who died aboard The Quimby included Charly’s best friend Amanda, whom she (quietly) loved.

Over the course of Season 3, Charly would be nudged to help reboot Isaac’s life after he died by suicide, and in what would be Season 3 addition Anne Winters‘ final episode, she sacrificed her life in order to destroy a weapon that could be used to eliminate all Kaylon, genocide-style.

Charly’s final words, just as the blast was about consume her? “I’m here, Amanda.”

TVLine spoke with Winters about making the leap from 13 Reasons Why to Hulu’s space adventure saga, Charly’s “love” for Amanda and more. 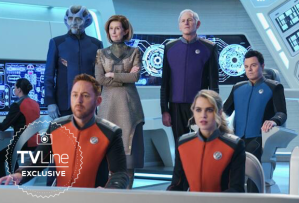 TVLINE | I never saw 13 Reasons Why, but I will assume this role was a bit different for you.
A lot different! A lot different. First time in space, for sure.

TVLINE | What was it like for you not just joining a tight-knit cast, but as a character who “had some opinions” and rougher edges?
I loved the challenge that I was given. To come into a completely different genre, and especially on a show that’s already been together for a couple of years, there’s always a bit of, “Hmm, what’s going to happen? What’s the vibe on set?” But I fit right in, and I feel like we all become good friends. I mean, you spend one day on that bridge with everyone there, and everyone is BFFs by the end of the day.

As far as my storyline, I was really excited to come in hot and have a cool character that was a lot different than everyone else. They needed someone from outside of the ship that went through that battle [with the Kaylon], to be able to come in and show a different side. Someone that didn’t ever know Isaac.

TVLINE | It was good that they established Charly’s tragic backstory right away, instead of leaving us to wonder what her deal was.
Actually, that scene with Amanda was one of my first scenes that I filmed, and then a couple of weeks later I found that I in fact loved her, so I ended up doing the scene again. [Series creator] Seth [MacFarlane] gave me that opportunity, which I really appreciate. He was like, “If you do want to reshoot it, it could look the same, it could look different, we don’t know. But if you want to, let me know.” I was like, “Actually, yeah. I’m going to take you up on that.” 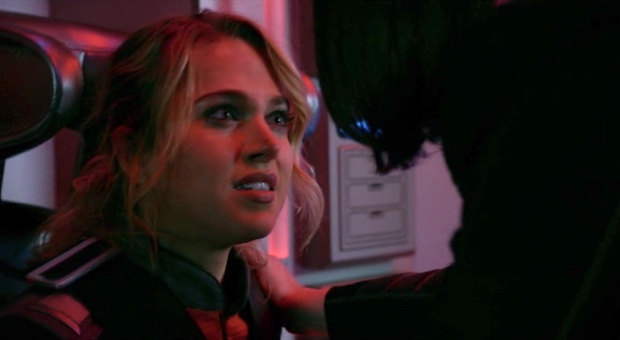 TVLINE | Why, what was the original direction for you in that scene?
I just thought that Amanda was a coworker, one of my friends; I didn’t realize the weight of the [actual connection], and that is the main season Charly hated Isaac. There was this girl that she loved and she never got to say it, and since that was a core part of her story and in her mind all the time, it felt right to do the scene again with that in mind. I don’t know if it looked any different to the naked eye, but it felt different as an actor. 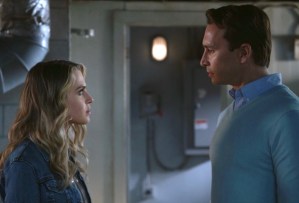 TVLINE | Were Charly and Amanda actually lovers, or as she told Isaac, was Amanda someone Charly loved but we don’t know how Amanda felt about her…?
I guess that’s kind of up to the audience to think about. In my head, I had it that I had loved her and never said it. But we weren’t lovers. I probably didn’t realize that I even liked girls until I met her, and I was probably scared to say it out loud…. I was just happy to be her best friend, and I was going to tell her that it was more than that — and I never got to.

TVLINE | What was the coolest thing you got to do on The Orville?
The coolest thing… Oh! When I got to jump out of the plane,. That was fun. I loved that, that was my favorite day.

TVLINE | And Charly was so chill about it — “Just hit the button before you hit the ground. Good luck!”
I know, I love that line. Yeah, and that entire outfit took weeks to put together. Those helmets were completely fit to our heads, so that alone was a massive deal.  (Watch Winters’ Instagram BTS of the sequence.) 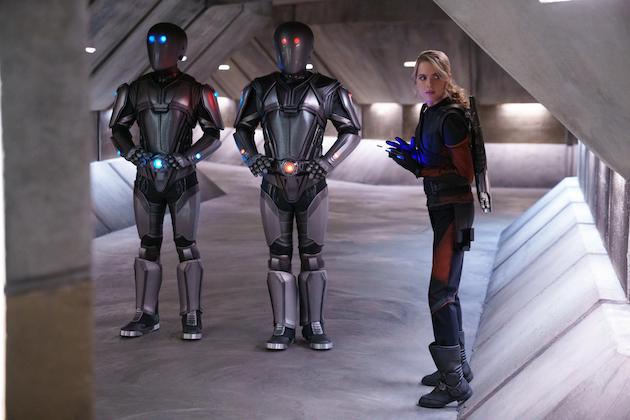 TVLINE | Did you always know that Charly would die by the end of the season?
Yes. Yes. I’m not going to lie, that’s actually a big reason why I liked it. At the time, pre-COVID, I liked dying on shows because it gives me an opportunity to do something new and different, have a really great storyline, and then be available for the next thing to come and keep doing different things. But this pending death, with COVID [production delays] and everything, was a long time coming for me! [Laughs] Who knew that this one season of a show would take as long as maybe two seasons of a show?

TVLINE | How did you like Charly’s heroic death? It was very powerful.
I think that the first episode and my last episode are my favorite two, for my character. It set up really strong from the get-go, but also the ending was also the same in a way.

TVLINE | … that’s when it hit me this was such beautiful full circle for the character.
That was actually my last day on set, too, filming that. 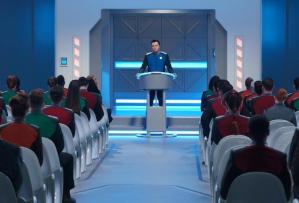 TVLINE | What, you didn’t eavesdrop on your own memorial service?
No. At first I thought it would be sadder than a funeral on 13 Reasons Why, but people in space have been trained to not have a lot of emotion and for this to be “normal” in way. Not a lot of people were bawling. I don’t want to see people just stare at my face on a massive flower arrangement thing!

TVLINE | Even though you’ve been killed off, have you heard anything about the season finale, what we can expect this Thursday?
When something like this happens, you know Seth — it kind of ends on a good note. I think that people will walk away feeling fulfilled by the season. Even with all the drama, even with all the people still shedding a tear for Charly’s death, everyone will be happy in the end, in a way.