Tuesday’s Only Murders in the Building gets to the root of Mabel Mora’s selective memory.

A series of flashbacks reveal that Mabel’s father — played by All My Children and Riverdale alum Mark Consuelos — died when she was 7. “They didn’t tell me what was really happening. They wanted to protect me,” she says. “They said he had to move out for work. Six months later, he was dead. Stomach cancer. 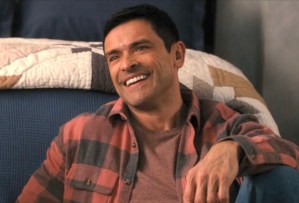 “I knew something wasn’t right, but I was happy to play along,” she explains. “I didn’t know how to cope with him dying, so I didn’t. Instead I flipped the pieces over in my mind until I couldn’t see the image anymore, just like he’d shown me. That was when I lost my first memory — and it’s happened since. If something was too much or too difficult, I was afraid to see what really happened, or what I had possibly done. But I have to flip the pieces now. All of them. Otherwise, I’ll never see the full picture.” 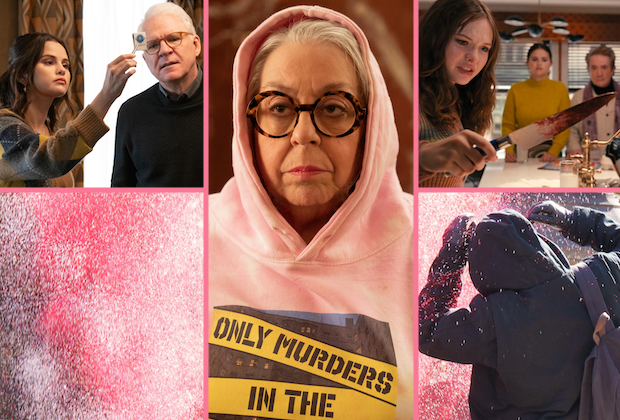 In doing so, Mabel can finally see what happened the night Bunny died: She took off her coat and witnessed the killer run into her closet. But before she could grab her knitting needle (or even realize it was missing) and chase after the intruder, Bunny approached her, covered in blood. She’d already been impaled.

Prior to flipping the metaphorical puzzle pieces in her mind, Mabel is convinced she’s some sort of unhinged psychopath who enters fugue states and stabs people. But Theo, who was on the same train the night Mabel stabbed Glitter Guy, confirms that Mabel skewered her attacker in self defense. He got away with her purse, which contained the incriminating matchbook, but dropped a Coney Island security badge on the subway platform.

Naturally, Mabel and Theo head to Coney Island for answers. Glitter Guy is there, but Mabel manages to escape her attacker and snatch his backpack on the way out. Inside she finds her purse, but not the matchbook. She also finds a recent photo of Charles with Lucy, which leads us to believe that Lucy is in grave danger. Charles phones Lucy immediately, but just as he’s about to warn her to get out of his apartment, the call drops. A citywide blackout has just begun.

Also of note: Detective Williams returns from maternity leave determined to solve the case and clear Mabel’s name. In turn, Charles and Oliver hand the murder weapon over to the detective so she can run it for prints.