OK, now it really feels like the beginning of the end for Animal Kingdom. In Sunday’s game-changing “Gethsemane,” the Codys circled the wagons around Pope and retained a high-priced attorney to accompany him when he turned himself in for assault. 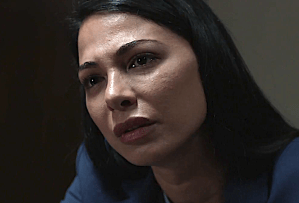 Wait, not murder? No, assault. Thompson didn’t have enough evidence to bring him in for killing Catherine, so she had an Oceanside detective put out a warrant for his arrest for assaulting Taylor. Once Pope was in the interrogation room, Thompson came in before his lawyer did and, whether Andrew liked it or not, laid out all of the reasons that he should confess. Did he want Lena to see the photo of her mother’s body after the animals had gotten to it? Did he want to destroy the little girl’s life?

TV Shows Ending in 2022: This Is Us, black-ish, Gentleman Jack, Expanse, Walking Dead and 40+ Others

And what about Amy? Yeah, Thompson had followed her home after her dinner with Pope and discovered that he’d admitted his greatest sin to her — in so doing, making her an accessory to his crime. If that came out during a trial, the detective noted, that would probably be pretty bad for Amy, huh? And her sobriety. And her son. “You know the path to redemption,” she told Pope. “There’s only one way — confess.”

Cornered, that was exactly what he did. As you’d expect, all around him, his family fell apart. Craig, now aware that his brother had murdered Cath in his home, tearfully showed up on Renn’s doorstep. (Presumably, when the dust settled, he’d be more open to his babymama’s idea of moving to San Antonio and starting over clean.) Deran, losing his s—t, screamed at Tommy that “it’s over” and fired his loyal barback. As for J, he not only supported Penny after Cindy OD’d (she lived, by the way), he offered her one of the Codys’ free apartments and a way out of her life with a husband she didn’t love and a sister for whom she didn’t have to be responsible.

Meanwhile, in 1992, Smurf attempted to bribe Baz into giving up the “teenage drama” with Julia by giving him a condo on the Strand. The Mother of the Year also paid a beach bunny to punch Pope’s V card and blamed Julia for both Baz’s new living arrangement and Andrew’s sexual hangups. So, your reaction to “Gethsemane”? Will the show end with Pope going to the chair? Is there any other way out?