That’s a wrap on Flowers in the Attic: The Origin.

Saturday’s packed finale came full circle when Olivia and Corrine locked the latter’s four children in the attic with the promise that it would be just for one night. (In Flowers in the Attic, they spend years sequestered away.)

In the episode’s final seconds, the camera focuses on Corrine’s seemingly neutral face before turning to Olivia’s harsher expression and finally, that wooden door with the lock on the outside — all hinting at the fresh new horrors still to come. If Corrine’s expression felt a little sinister, portrayer Hannah Dodd says that was intentional.

“I knew that she was described as sickly sweet for quite a long time into Flowers in the Attic, so I didn’t want it to be this sudden switch,” Dodd tells TVLine. “But at the same time, it’s nice to show that glimmer of what is to come. We played it a few different ways: just that walk away, different facial expressions… Whether you want to read anything into it, it’s up to the audience. [We] played around with different voiceovers as well, just to see what led people in that direction.” 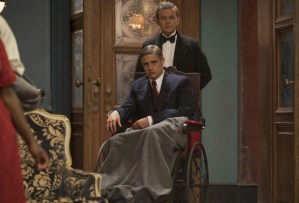 The finale also explained exactly what happened to the Foxworths and their acquaintances after that unforgettable night of Corrine’s debutant ball. Corrine and Christopher ran off to get married and start a family of their own, and Olivia tried to kill Malcolm when her children refused to live under the same roof as him. She staged a fall that left him paralyzed and unable to speak, but still alive (because evil never dies). With him no longer a threat, though, Olivia took over his family business and Nella moved to New York to pursue her dream of singing.

Meanwhile, Corrine and Christopher carved out the perfect suburban life with their kids before he died in a car accident, and Harry and Joel got their happy ending traveling the world together.

“I loved, from the outset, Harry and Joel’s story,” Dodd shares. “Obviously, that is completely new [and] not in the book. We all talked about the fact that they are the only people who really get their happily ever after. That’s so beautiful that their love could stand the test of that whole awful place, and they get out and they get to live their happily ever after. For everybody else who stays, it just gets worse and worse and worse.”

See below for the rest of TVline’s interview with Hannah Dodd.

On the moment that left her surprised…
“That moment where after Steiner is dealt with [in Episode 3], and Malcolm kisses Olivia for the first time. That was a massive surprise and so twisted. It’s such a simple thing, but so messed up in the worst way possible that he suddenly had some sort of respect and adoration for his wife for the first time in so many years. Also, it’s sad that Olivia still needs that from him, even though she turned her back on him and he turned his back on her so long ago. It’s twisted, how reliant they all are. They’re so intertwined and it’s so messed up.” 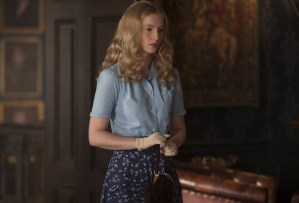 On a scene that was cut…
“There was one scene that was cut down, which was Corrine’s abortion scene [in Episode 2]. I think it works out for the best, but that was heartbreaking. It’s even more heartbreaking now. A few of us discussed it recently with how it felt filming it and how the world has changed literally in the last couple of months. It was meant to be a ‘Look how far we’ve come’ [moment] and now it represents something so much worse; how some women are going to go through something like that and how it represents a man who thinks he’s entitled to an opinion over a girl’s body. It drives her to have to have an option like that and there wasn’t a better option for her.”

On whether she thinks there can be a follow-up Flowers in the Attic limited series…
“I don’t know. Obviously, the next step is Flowers in the Attic and that has been made so I wonder if there is a demand for it. Obviously with a limited series, you get to delve into the characters a bit more. I would be intrigued to see what that would look like, whether or not we came at it from a different point of view, maybe you saw what happens outside the attic during that time. There would have to be a reason for retelling that story because Lifetime’s already done it [and] they’ve done a great job of it.”

What did you all think of Flowers in the Attic: The Origin’s finale? Are you satisfied with where it ended? Grade the episode below and then sound off in the comments.