“A” new generation of PLLs emerged on Thursday with the premiere of HBO Max’s Pretty Little Liars: Original Sin, and we’re definitely not in Rosewood anymore.

Staying true to its title, the premiere begins with a flashback to New York’s Eve 1999, the night of the original sin. A girl named Angela, whose cries for help are ignored by her partying peers, drops to her death at a warehouse rave. (Minor spoiler alert: It’s explained in Episode 3 that the actual “sin” in this case was that none of Angela’s supposed friends even bothered to call 9-1-1, leaving her corpse to rot for days. Sorry ’bout it!)

Twenty-three years later, those do-nothing teenagers are now grown women, and it’s time for them to pay the price for their inaction. On whose authority, you ask? Well, that question is pretty much the whole point of the show, so buckle up — we’re in for a long ride.

One of the grown women, Davie (played by Carly Pope), finds an old invitation from the infamous party taped to her front door with a charming note: “Gone but not forgotten. You can’t ignore the past. The countdown is on.” It’s horrifying, though not half as horrifying as when Davie’s teenage daughter Imogen (Bailee Madison) discovers her mother dead in the bathtub with the letter “A” scrawled in blood on the wall. Big yikes!

Following a modest time jump, Imogen — who’s six months pregnant, by the way — returns to Millwood High School, where she’s immediately greeted by mean girl supreme Karen (Mallory Bechtel). “No one wants your tragic pregnant ass here,” Karen whispers to Imogen, which is really effed up when you consider that Karen was with Imogen when she discovered her mother’s body. No mercy!

Karen’s whole deal is that she thinks Imogen kissed her boyfriend Greg (Elias Kacavas) at a party, despite Imogen’s insistence that Greg did the kissing. If your instinct is to believe Imogen, congratulations, you’re a good person. Unlike Greg, who is trash. 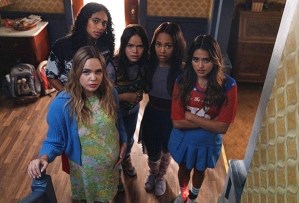 OK, time to meet the rest of the Liars: There’s Mouse (Malia Pyles), whose overprotective moms worry about how much time she spends online; track star Noa (Maia Reficco), still rocking an ankle monitor after her recent stint in juvie; Faran (Zaria), a talented ballerina who’s constantly undermined by racist competitors; and Tabby (Chandler Kinney), a horror movie buff who took in Imogen after Davie’s death.

And where there are Liars, there’s “A.” As the daughters of the women who allegedly committed the “original sin,” these seemingly innocent girls are now officially targets, and the textual terrorist begins their work immediately.

Noa receives her first text (“Don’t do the crime if you can’t do the time!”) while completing community service. This text, coupled with the sight of an absolute creep staring at her from a distance, prompts Noa to alert Sheriff Beasley (Eric Johnson)… but he’s too busy getting serviced by a young man in his squad car to care, so she just kind of walks away. Tabby, whose first text asks the age-old question “What’s your favorite scary movie?” also encounters that aforementioned creep. But in Tabby’s case, the creep inadvertently interrupts her boss (Derek Klena) while he’s trying to take advantage of her, so we’ll call that one an accidental win.

Faran’s text comes in the form of a curious compliment (“You’re going to slay as the Black Swan!”) from someone alleging to be her No. 1 fan. This comes right after Karen basically implies that Faran only got the role because she’s Black, so she’s already had a day, ladies and gentlemen. Never mind the fact that her dance teacher — literally named after The Phantom of the Opera‘s Madame Giry — is vaguely threatening to tell Faran’s dream ballet company about her secret scoliosis battle. Can someone drop a chandelier on her please?

Meanwhile, Imogen’s return to Millwood High is not going smoothly. Not only does she ask the school nurse for an abortion during a moment of absolute panic, but the principal (who also sucks!) suggests that Imogen’s presence might be triggering for other students. This sends her over the edge, and straight into an extremely entertaining rage. After publicly confronting Greg for lying about the kiss, she vows to win Spirit Queen over Karen.

Then come a few unnerving twists, the least of which being the death of a janitor at the hands of that creep I mentioned earlier. Posters supporting Imogen as Spirit Queen start popping up around school, while the eyes on Karen’s posters are suddenly scratched out; Karen finds a dead rat in her bag, for which the principal blames Mouse; Noa’s urine tests positive for cannabis, despite her never using it; and Karen steps on a razor blade hidden in her ballet shoe, the blame for which falls on Faran’s shoulders.

And that’s how the Liars meet, wrongfully sent to detention for crimes they didn’t commit. But who did? Karen, perhaps? With the little information at their disposal, you really can’t blame the girls for wanting to take her down. Some Karens just deserve to be canceled.

Other things we absolutely must discuss…

* Is anyone else surprised that we saw an actual penis in Tabby’s secret locker room footage? What is this, Euphoria? Kim Roots must be thrilled. 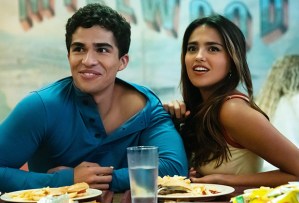 * Boys are generally not to be trusted in the world of Pretty Little Liars, but we all love Noa’s boyfriend Shawn (Alex Aiono), yes? A total babe who understands his girlfriend’s complicated legal situation and actually suggests that she do the right thing? He seems too good to be true, which means he probably is.

* I may fall asleep, but I will not truly rest until I know the father of Imogen’s baby.

Your thoughts on the new Pretty Little Liars? Grade the Original Sin premiere below, then drop a comment with your full review.