If you’re just joining the franchise this season, you must know that T.J. Lavin’s favorite daily challenge is trivia. It’s one of the series’ staple events often designed to make the cast look as dumb as humanly possible, all while forcing them to endure a terrifying freefall, which often (but not always) includes a drop into water. This time, the cast stays dry, but they’re in for one death-defying stunt as they’re about to plummet 250 feet off the side of a skyscraper!

While we love to see their horrified faces as T.J. maniacally laughs, this particular trivia event doesn’t create the episode’s biggest fireworks. Past drama between the Big Brother 23 cast finally comes to a head after the winning BB duo sets its crosshairs on Xavier. Who won, and did they actually take the shot? Plus, which team emerged victorious from the Arena? Let’s discuss it all in our latest recap!

After the new duos are selected, Alyssa tells Derek that the best thing for his game (read: her game) is for Xavier and Shan to go. Despite the fact that they were on BB23 with the Cookout, Alyssa and DX want to take the former alliance members out. Meanwhile, the Love Islanders don’t think Big Brother is going to turn on itself so soon. The table seems to be set for one delicious #blindside, but it all depends on who takes the cake at the challenge.

DAILY CHALLENGE | The cast is greeted by T.J. who is already laughing like a hyena. That’s right, kids: It’s trivia time!

In “Falling Off the Knowledge,” duos will be placed on a ledge 250 feet above the ground. They’ll be asked a series of questions. Get the answer wrong, and they’ll be taking that long fall down, down, down. The game is played in multiple rounds and here’s how it shakes out: 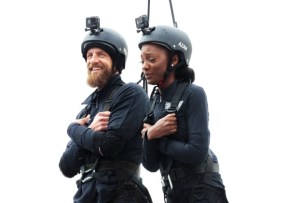 Round 1: Danny and Kyra are the first to take the plunge, so they’re heading directly for the losers round. Dom and Angela, move to the winners round.

Round 2: Derek and Sarah have no idea who’s played Catwoman. Ever. In the history of Batman films. So they’re going straight to the losers round. Kyland and Alyssa move on.

Round 3: David and Justine can’t name an Oscar-winning actress in the last 10 years, so they’re outta there! Ben and Azah become the last team to join the winners bracket.

Final Rounds: The first team to fall in the losers round is going straight into elimination, and sadly for David and Justine, a question about the NHL sends them straight to the Arena. And after correctly naming most of the zodiac signs, Kyland and Alyssa win the whole shebang.

DELIBERATION | Since Xavier backstabbed almost his entire Big Brother cast, he tells us via confessional that he’s totally expecting someone from his cast to come for him. Despite rebuilding their relationship, Kyland seems perfectly fine doing so, especially since Alyssa seems down for it.

The winners meet with the losers, and Justine says that although she doesn’t want to go up against Cinco, she’s not against taking on Shan and Xavier. Kyland and Alyssa check with Angela and Tyson, who both give their blessing for a possible Shan/Xavier vote. (Shan, meanwhile, is chatting on the side and calls Kyland “insufferable” and Alyssa a “weasel.” C’mon, this is The Challenge! Talk that smack to their faces and let’s stir up some DRAMA.)

ARENA | The time comes for the winners to decide who goes in, and Alyssa and Kyland pull the trigger. However, they try to pin the blame on Shan, saying that multiple people in the house told them to watch out for her, but Survivor‘s mafia pastor sees right through their BS. In an interview, she calls them petty and says they need to “grow a pair.” (She’s not wrong.) 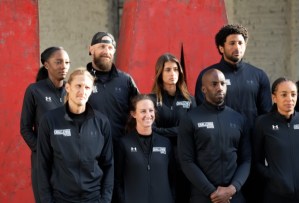 In “Smash In, Puzzle Out,” teams must break panes of glass in order to retrieve puzzle pieces. Once they crawl into the steel tunnels and grab their pieces one at a time, the first team to construct the puzzle wins. However, each teammate is responsible for hitting specific panes, so if they break the wrong one, they’ll be saddled with a five-second delay that they must pay before beginning the puzzle.

T.J. blows the horn and they’re off. Xavier decides to break all of the glass, penalties be damned, but Justine and David hold their own by taking turns. Xavier and Shan get to their puzzle pieces first thanks to X’s hulking out, but once they’re out of the contraption, the clock starts on their 50-second penalty. David and Justine accrue a 10-second penalty, and once their time expires, they start their puzzle first. Unfortunately for Xavier and Shan, the longer penalty was enough to give David and Justine the edge, and the Big Brother 23 victor and the mafia pastor are shockingly eliminated from the game.

Surprised that Big Brother cannibalized itself so soon? Did you think Xavier would actually lose that elimination? Light up the comments section below!