Oliver Jackson-Cohen is tired of playing the cloaked-in-black bad guy.

“It’s boring watching someone be the villain,” he tells TVLine. “I’m interested in the gray area in between that.”

It doesn’t get any grayer than James, his devious and withholding new character in Apple TV+’s upcoming psychological thriller Surface. In the series (which premieres Friday, July 29 with its first three episodes, then drops new episodes weekly), Gugu Mbatha-Raw (The Morning Show) stars as Sophie, a woman who is left with severe memory loss after falling into the ocean. Though she’s told by doctors and her husband James that she tried to take her own life by jumping, Sophie can’t figure out why she would’ve tried to end a life that, from the outside, looked seemingly perfect. As she continues putting the pieces together, a mystery man (Homecoming‘s Stephan James) warns her that she can’t trust her husband. But who can she trust?

As the story unfolds, viewers will certainly flip-flop between distrusting James entirely and empathizing with the man who has far more layers to him than meets the eye.

“I’m sure there’ll be certain people who have sympathy for him,” Jackson-Cohen adds, “but again, it lives in this gray area where, without spoiling too much, it can be perceived in so many different ways.”

Below, the actor talks to TVLine to preview the show’s themes of love and trust, and break down what went into crafting a character that was so loaded with murky intentions.

TVLINE | Surface is such a captivating mystery full of juicy twists and turns. What was it about the project or character that immediately pulled you in?
OLIVER JACKSON-COHEN | I guess it was the script. I don’t think I’ve read anything that was so compelling and such a page-turner to read. It started with that, but there were so many factors. There was Sam Miller, who was our main director and did most of I May Destroy You (which I thought was the greatest show of 2020). It’s him and Gugu [Mbatha-Raw] and [production company] Hello Sunshine — I think they’re incredible producers over there. It was a combination of all of it.

Ultimately, I loved the idea. I think it was such a brilliant concept to have your lead character not know anything about herself and all of these people around her holding all of these secrets. I think that’s such an interesting premise. So with James, there was so much to get into of how much he’s withholding and when we choose for him to share what he’s holding back. If he ever tells the truth, what is he protecting? What is he hiding? There are so many different and exciting layers in there, I just really wanted to be a part of it.

TVLINE | At the start of the series, how would you describe the marriage between Sophie and James?
To the outside, it’s this sort of picture-perfect life that they live. They have this incredible house, this money, they have all of the outwardly material stuff that anyone could aspire to. But there’s something fragmented within their relationship. James is so busy using all of his energy to cover up and sort of paste over it. I think [creator] Veronica [West] does that very, very well. She writes the intricacies of secrets that are withheld within relationships and why they’re withheld. There’s something incredibly broken — I guess that’s probably the best word for it — about their relationship.

TVLINE | You mentioned Gugu. How was it working with her, and how did you two navigate the rollercoaster of emotions these characters go through?
There was a period of time in August, I think it was about six weeks, where every single day we were going into work and it was like ripping our hearts open. Then you go home, get up the next day and do the same thing over and over. Gugu’s incredible. Gugu and I met probably about 15 years ago. I think it was her first job and my first TV job. So we had sort of known each other and seen each other over the years. We’d already had a friendship from before so I think that always helps jumping in and trying to build relationships and trust and all of that stuff. 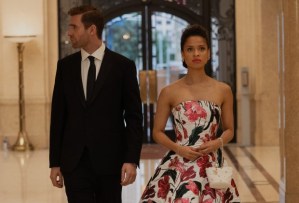 It was such a joy working with her. She is just an incredible human being. It was painful, but good fun. The filmmakers gave us so much freedom as well, and specifically later on in the show. There’s an episode where James finally comes clean and puts everything on the table, and they allowed me to just sit in front of Gugu with two cameras on us, and we’d do these 25-minute takes where I’d just tell her the story right from the beginning, from the moment they met until the present day. That was so much fun. It was kind of like doing a play. It was a really amazing experience.

TVLINE | For so much of the series, it’s unclear whether James can be trusted. What went into playing up that back-and-forth between a hard-edged guy with loads of secrets and a heartbroken husband that we simultaneously want to sympathize with?
You know what? I don’t think I did. I actually think all of that comes down to an edit. [Laughs] If someone puts a coat over someone’s shoulders, that can seem like an act of kindness, but it can also seem like possessiveness. It never felt right in the show to play up any part that was inauthentic. We didn’t want to push things, that felt like a cheap trick. What we wanted to achieve was that people would watch the season and then go back to the beginning and watch it again and see how it was all so clear from the get-go. So at times, I think there’s credible power in withholding information, and regardless of what the intention is, that can be interpreted so many different ways, so we would play with that. What is it that happened that day? What is it that is said that then triggered something that can be a painful memory that then registers as menacing behavior? So it was all about trying to paint the colors in where we needed them.

TVLINE | Did you draw from any other mysteries or psychological thrillers when crafting this character?
I don’t know necessarily if I had any in mind. I’m always a bit wary of trying to take inspiration from work that’s already been done. I think it felt very important to just deal with the task that was Surface. But there was a documentary called Tell Me Who I Am on Netflix. I don’t know if you’ve seen it, but it’s a harrowing film about twin brothers who had a horrific childhood, grew up, and then one of the brothers had a motorcycle accident and lost his memory. So the other brother filled him in but told him only the good bits and left out all of the bad bits that happened to them. It’s such an interesting documentary because it follows the cost of holding on to that secret and having to bear the brunt of that in order to protect someone else. That felt incredibly apt for our show. I watched that and that sparked a bunch of stuff in terms of the approach to James and Surface. 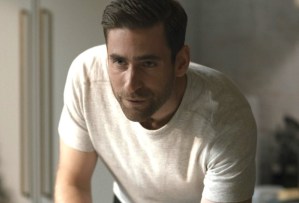 TVLINE | I haven’t seen it, but I’ll check that out.
It’s horrific, though, be careful!

TVLINE | What does this series say about trust in relationships?
So much! I’m not married, but friends I know that are married and have been together for a long time, you start to realize there are things that are not necessarily said to one another, that are withheld. Secrets exist. And the bigger the secrets, the bigger the gap between the two people in the relationship. I think the show deals with that in a very human way where. It’s very interesting for Gugu, playing a character who basically wakes up in a world surrounded by people she’s been told she should trust but she can’t. She has to go out and make her own decisions about it.

TVLINE | James is such a loaded character. How are viewers going to perceive him after everything’s said and done?
I think stuff like this is very interesting. I did a show about two years ago for Netflix where I played the quote-unquote villain [The Haunting of Bly Manor], and it was very interesting to see how an audience responded to that character because he was an absolute piece of s–t. But it’s boring watching someone be the villain. I’m interested in the gray area in between that. If I’m honest, I’m quite scared to see how people respond [to James], because I do think… I’m sure there’ll be certain people who have sympathy for him, but again, it lives in this gray area where, without spoiling too much, it can be perceived in so many different ways, so I don’t know! Why don’t you call me back in September and I’ll let you know!

TVLINE | I’m sure Twitter and Reddit will have a field day with this guy.
I’ll be throwing my phone in the ocean by then. [Laughs]

TVLINE | Without spoiling anything, can you give readers a tease for what’s in store for them?
Oh my God! It’s just doesn’t go where you think it’s going to. Episodes 7 and 8 are like a whole day at Six Flags. It’s so insane what goes on in those episodes. Just when you think you’ve got a handle on it, it then flips the tables on itself. It’s quite a stressful and delicious experience!