That ’70s Show vet Ashton Kutcher is opening up about his recent return to Point Place.

Everything We Learned on That '90s Show 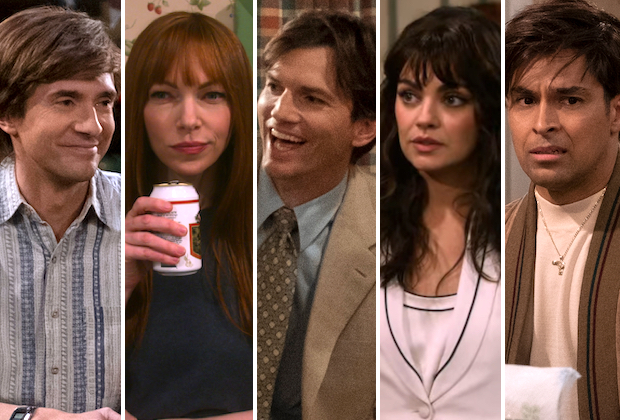 As previously reported, Kutcher and Mila Kunis, now married in real life, are set to reprise their star-making roles as Michael Kelso and Jackie Burkhart in Netflix’s That ’90s Show.

“It was really nostalgic to be back on the set,” Kutcher tells our sister pub Variety. “Mila and I were contemplating it. We thought, ‘Listen, we’re only in the position that we’re in because of that show, so let’s go back and do this.'”

While the extent of Kutcher and Kunis’ appearances have not been confirmed, Kutcher indicates that he and Kunis were back on set “for a week,” before adding: “It’s really funny. The new cast is phenomenal.”

The spinoff picks up in 1995 and centers on Eric and Donna’s daughter Leia (played by Shut Eye‘s Callie Haverda). While visiting Point Place for the summer, the teen “bonds with a new generation of Point Place kids under the watchful eye of Kitty (Debra Jo Rupp) and the stern glare of Red (Kurtwood Smith),” according to the official logline.

In addition to Kutcher and Kunis, Season 1 guest stars include Topher Grace (Eric), Laura Prepon (Donna), Wilmer Valderrama (Fez) and Tommy Chong (Leo). A release date has not yet been announced.

Kutcher most recently headlined Netflix’s The Ranch, which currently stands as the streamer’s longest-running multi-camera comedy (at 80 episodes). That series reunited him with ‘70s costar Danny Masterson (Hyde), as well as Rupp, Smith and Valderrama, all of whom recurred. Prior to that, he returned to his sitcom roots as Charlie Sheen’s successor on CBS’ Two and a Half Men (from 2011-2015), on which Kunis guest-starred.

Are you looking forward to That ’90s Show? For more intel on the sequel series, click here.