Blood & Treasure‘s Danny and Lexi racked up lots more frequent flier miles this week, as the hunt for the Soul of Genghis Khan took them from Vietnam to Russia — with a stop to see an old “friend” in Ireland along the way.

Season 2’s third episode opened with Danny, Lexi and a very reluctant Shaw putting on a performance for the listening device they had discovered, so as to bait Kate and her CIA pals into following Lexi to a made-up meet-up. When the time for said assignation rolled around, and as Kate & Co. tailed Lexi, Shaw and pint-sized Han created a streetside distraction, allowing Danny to isolate and confront his ex-fiancee — though not long before Lexi showed up to taser the duplicitous blonde. 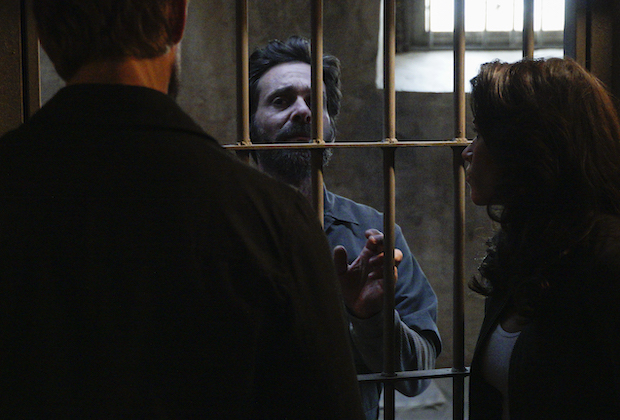 Tied up back at Shaw’s place, Kate was wholly uncooperative, saying not a peep. While Chuck watched over Kate, Danny and Lexi went downstairs to see what Vince had gleaned from a cell phone pinched from Zhang last week. The only noteworthy lead was a series of calls to a “Graham Townsend” — aka Simon Hardwick. Danny and Lexi made tracks for the supermax Irish prison their former foil now calls home, and where they tried to avoid being “Lectered” by the imprisoned, knowledgeable asset. Simon, after registering his considerable surprise that Danny and Lexi were still together, ultimately offered up the name Andrei Lenchekov, a former Russian gang member who found love and now runs a restaurant in Moscow with his wife.

Sneaking into Russia — where Lexi is a wanted woman, and by way of an old mark that “American” Lexi used to date — the duo swing by Andrei and Claudine’s restaurant, and drop Simon’s name. Alas, doing so without making clear that Simon is no friend almost gets many of Danny’s fingers chopped off by Andrei (Black Sails‘ Zach McGowan). But once everyone’s agendas become clear, Andrei suggest they check out the old bunker where Stalin amassed many of the knick-knacks he’d come across. 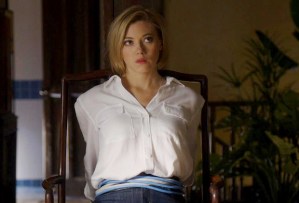 Meanwhile in Vietnam, Chuck leverages his, Danny and Kate’s old times together — including an anecdote about how Kate is the reason he became a priest —  to make her loosen up. Kate talks of how being disappointed by her father colored her view of the world. She also explains that the CIA, which years ago used the Great Khan to take down assorted crime syndicates, now realizes the monster it created, and planned to use the banner to draw him out, for capture.

Back in Stalin’s bunker, Danny finds the carrying case for the banner, but not the artifact itself. As one of the Great Khan’s goons KOs Andrei’s bodyguard and infiltrates the bunker, Danny & Co. glean from dusty ledgers that the banner made a stop in “The Forbidden Zone,” an old Red Army Base that is considered to be Mongolia’s Area 51. After the Great Khan’s goon kills Claudine, and Andrei in turn shoots dead the other bodyguard who failed him, Andrei summons his old gang, the Night Devils, to escort him, Lexi and her solnyshka Danny to The Forbidden Zone.

The Great Khan, meanwhile, hears from the aforementioned henchman that Danny and Lexi had been in touch with Simon Hardwick — so now the crime lord is determined to also  see what Simon knows, all as his minions stack drums of radioactive/nuclear something at his compound….

What did you think of the episode “Spoils of the Red Empire”?