In this week’s episode of Flowers in the Attic: The Origin, Mal’s tragic death hits the Foxworth home hard, and everyone not named Malcolm is grieving in their own way.

Corrine — who accidentally killed her brother with the poison meant for their father — destroys all her dolls, Olivia is too despondent to interfere as Malcolm terrorizes the household, and Joel has fallen into the arms of Celia’s stepson Harry.

In yet another curveball for the family, Alicia shows up unannounced to reveal that she is dying from cancer and hopes the Foxworths will take in her son Christopher after she’s gone. Olivia leaves it up to her husband to decide, and Malcolm lays out his condition: Christopher will have to work to live under their roof and have his tuition for medical school paid for.

With her debutant ball around the corner, Corrine convinces Malcolm to let her go shopping in town for a new dress by suggesting she borrow one of her grandmother’s outfits. That triggers Malcolm to send her off with Joel, along with some extra cash. As the siblings chat during the drive, Corrine suspects that her brother is seeing a girl, but Joel refuses to say anything. At the shop, she encounters a handsome young man, and they exchange flirtatious stares. But this is a V.C. Andrews story, so you know what’s coming. More on that in a bit.

Elsewhere, Joel and Harry are cute and flirty and talking of traveling together while Joel plays the piano. They kiss and are then interrupted by Malcolm, who had charged into the room to stop Joel from making a racket. Angered to see his son in a lip lock with another man, Malcolm has Harry arrested for stealing the watch Joel gifted him. When Nella pleads with Olivia to vouch for Harry in front of the police, Mrs. Foxworth remains silent and allows them to beat him up and then take him away. 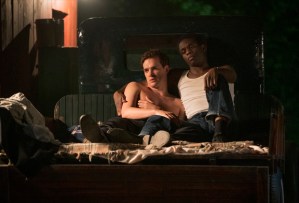 Remember that hunk from the shop? Turns out he is Alice’s now grown up son Christopher – Corrine’s uncle and secret half-brother. While the med student expects to do some office work, Malcolm stipulates that he must work in the yard alongside the other servants.

Joel tries to convince his mom to help Harry, insisting that what happened between him and Celia’s stepson was consensual. But that doesn’t sway Olivia, who again defers to Malcolm.

Malcolm privately meets with a physiatrist in search of an effective treatment for his son. He’s too wrapped up in the paperwork to notice that Mrs. Steiner, who was fired as his housekeeper, is now that doctor’s receptionist and catches him leaving the office. The treatment for Joel’s homosexuality consists of being committed to a facility in Westmoreland where professionals will “get it out” of him. Joel only agrees to go if Malcolm drops the charges against Harry. What Olivia doesn’t realize, though, is that the “treatment” Joel’s been forced to undergo is electroshock therapy.

Since Joel was barred from telling Corrine where he was going, she asks about him the next morning. Olivia and Malcolm’s story is that he left for Montreal after being invited to study with a composer at the Philharmonic. Corrine finds Joel’s letters to Harry and asks him where her brother really went. That’s when she finds out he has been taken to Westmoreland and confirms with Christopher that that place is horrible and ineffective. She and Christopher then relay the information to Olivia, who finally steps up and retrieves her son. Since she snuck him out (using her go-to move of bribing the doctor), she can’t bring him back to the mansion. So of course, she asks Nella to care for him. Nella only agrees to it because Joel helped get Harry released from jail.

The harsh treatments have left Joel severely wounded. He awakens with convulsions, and Harry is right by his side to help him through it. Corrine confronts her mother about Joel’s predicament the following day and then storms off on horseback just as a storm is about to hit. Later that evening, the teen still hasn’t returned and so her parents send out a search party. Christopher finds Corrine mildly injured but fine after falling off her horse. He takes her to a nearby chapel and rips a strip from his shirt to use as a bandage on her leg. The physical closeness leads a kiss, which ends abruptly when they hear Malcolm calling for Corrine. Malcolm dramatically carries his daughter back to the house and shows his gratitude to Christopher for “saving” his daughter by relieving the young man of his yard duties and agreeing to cover his education in full.

Outside of their rooms, which are next to each other, Christopher tells Corrine that they can never do that again since he’s her uncle. “Half-uncle,” Corrine points out. But Christopher doesn’t budge, and she reluctantly agrees that they shouldn’t continue whatever this is. Things get awkward over breakfast when Olivia suggests Christopher to be the one who shares her first dance at the ball. Corrine quickly volunteers her “friend” Rockford (who got her pregnant) instead.

Mrs. Steiner drops by the mansion with a threat to out Joel as gay if Olivia doesn’t pay her $3,000. While that won’t cover a loaf of bread today, it’s certainly considered a hefty fund in the ‘30s.

Joel has gotten much better and has decided to leave town. On his way out, he sits down to play the piano and is relieved to know that he still can. Malcolm finds him there, confused as to how his son got out of the hospital. Dear old dad becomes violent when Joel acts unphased by his verbal threats to cut him out of the will. But he is stopped by Olivia, who comes clean about helping Joel escape. Malcolm berates his wife, telling her, “Everything that you touch, it turns to ash.” But Olivia pushes back, reminding her husband that he is the root of all of their problems. Her boldness earns her an open-handed slap across the face.

Joel visits Harry and gives him back the watch that was reported as stolen, telling his lover that he can’t make him go with him since he deserves a life without memories of this place. But Harry sticks by Joel and insists that they’ll get through this. They’re going to see the world together. A newly empowered Olivia even gives Joel her ring to pawn until she can force Malcolm to give him access to his trust fund.

When Mrs. Steiner shows up to collect her bribe money, Malcolm tells her that she can blab to whomever she wants since he no longer has a son. Focusing on his favorite child, Malcolm surprises Corrine with one of her grandmother’s dresses for her big night. So, his daughter will wear the same dress that his mother wears in the portrait he keeps locked away in the attic. Gross, dude. Adding to the ick factor, Malcolm places a hand under his daughter’s chin as he says, “Nothing must distract from my Corrine. Not tonight.”

As guests arrive for Corrine’s ball, Malcolm is upstairs caressing his mother’s portrait like the soulless, perverted demon that he is. Mrs. Steiner, meanwhile, attends the party with some fresh new blackmailing material: She knows that Corrine is Alicia’s daughter. Call her the Suriel because this woman is in everybody’s business. 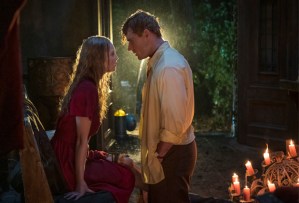 Olivia confronts Mrs. Steiner in her office and the former housekeeper pushes for $5,000. Olivia says she’s leaving to get the money but she actually locks Mrs. Steiner in from the outside and searches for Malcolm.

Christopher steps in for Corrine’s first dance since Rockford somehow went missing after asking Malcolm for her hand in marriage. During the dance, Christopher voices his concerns over her rushing into an engagement and she tells him he’s not allowed to be jealous given their previous agreement. Christopher sends her into Malcolm’s arms, and it’s then that we learn Malcolm scared her fiancé off.

After telling Malcolm about Mrs. Steiner, Olivia returns to the office, and she exchanges tense words with her blackmailer. Mrs. Steiner tries to leave but Olivia stops her, and in the scuffle, Mrs. Steiner bangs her head on the desk and is knocked out. This is the perfect time for Malcolm to walk in and use their phone to finish the job, bludgeoning her to death so that his former housekeeper can never tell anyone their secrets. The unholy pair return to the ball and dance together like nothing happened, and later head to the woods to get rid of the body. Nothing temporarily repairs a dysfunctional marriage like burying the woman who threatened to destroy their lives. Malcolm even kisses Olivia and tells her to get some rest while he finishes up.

Meanwhile, Corrine admits to Christopher that she can no longer fight her feelings for him. Christopher asks her to stop, but then caves and tells her he loves her. As Olivia makes her way upstairs, she overhears Christopher and Corrine having sex in Malcolm’s mother’s room. Yiiiikes.

What did you all think of this week’s Flowers in the Attic: The Origin? Sound off in the comments below.