Have you lived if you’ve never visited Miami for Spring Break or a bachelor/bachelorette party?

The premiere episode of Rap Sh!t, the new HBO Max comedy from executive producer Issa Rae (Insecure) that kicked off Thursday, starts off by reminding us how lit the Magic City can get. As guests check in and turn up in the lobby of the Plymouth Hotel, we meet Shawna (played by relative newcomer Aida Osman), a sort-of-kind-of well-known conscious female rapper, who is also a front desk associate for the hotel. After receiving a number of compliments from a guest for her rapping skills, including being a “sista with self-respect,” Shawna is excited to share her new music. Trying his best to appear interested, the guest spews more compliments and labels Shawna’s music as “queen s–t” worthy for young girls to listen to. But the content manager at Spotify doesn’t seem to think so: She has been avoiding Shawna’s phone calls and voice notes, despite being very active on social media highlighting other artists.

After an annoying encounter with a local party promoter who calls herself the Duke of Miami, Shawna goes on her lunch break. While simultaneously eating Fat Ronnie’s and searching for a flight to NYC, she gets a random FaceTime call from Mia (Love & Hip Hop: Miami‘s KaMillion), her former high school best friend. Mia is a make-up artist and single mother to a 4-year-old who works multiple jobs to make ends meet. After her baby daddy fails to come through, she is forced to figure out childcare arrangements. And despite the awkwardness of the conversation, Shawna agrees to babysit for Mia. 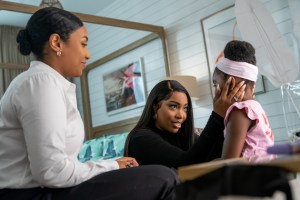 Before Mia arrives, Shawna’s co-worker Maurice shows her a new video from a white female rapper named Reina Reign who gives off Bhad Barbie-mixed-with-Iggy Azalea vibes. As a rapper who cares about her lyrical content, Shawna critiques the overtly sexual lyrics and is shocked to learn that Reina Reign used to be a signer who sang acoustic covers of rap songs. But after a number of plastic surgeries and body alterations, Reina is barely noticeable. Maurice throws salt on Shawna’s open rap wound by sharing that the track was produced by her former classmate/business partner Francois Boom; their relationship went south once Shawna realized she wasn’t willing to sell out for a million views.

On her way home (via public transportation) Mia can’t help but stalk Francois’ Instagram. And like most industry producers who are super young and made money fast, his IG is full of ignorant behavior like burning money and throwing shade at women. Visibly triggered, as soon as Shawna gets home she goes on IG Live to rant about talent vs. popularity and to shame her followers and the general public for not supporting her. “You know what? F–k this,” she yells. “I am tired of being slept on. I’m so tired of being underrated. Y’all’s favorites are out here doing the bare minimum with no originality while I’m over here living and breathing this rap s–t.” After questioning what hip-hop fans really want and accusing them of “not respecting good music,” she publicly declares that she has quit the business.

Then, a call from her long-distance boyfriend interrupts her rant. Cliff is in law school and tries his best to make his girl feel better by having a passionate virtual sex session, but her bad mood causes an argument. Before the night is over, Shawna sends her connect a hotel guest’s credit card info, then sends Mia a DM asking her if she wants to hang out. Before Mia responds she puts on a virtual show x-rated show for extra cash and then proceeds to fuss her baby daddy out once done.

The next night, the two former besties meet up for a Miami night out. After one too many drinks, Mia introduces Shawna to the city’s almost-anything-goes strip clubs. The girls document their entire night on IG, even their end-of-night drunk recap catching up. When the Remy’s in the system, or whatever Jay-Z said, people begin to start expressing their honest feelings. To Shawna’s surprise, Mia admits to being offended by Shawna’s “I’m better than you” behavior after graduation. After getting it all off their chests, they realized they are still on IG Live. To lighten the mood up they turn up. In the middle of their car karaoke, Mia challenges Shawna to rap. She declines at first but quickly gets in her bag. Keep in mind that drunk Shawna left the conscious stuff at home. But this might be a good thing, because their views keep going up and viewers are in the comment section co-signing their litness.

The next day when Shawna wakes up she receives the sweetest good morning text from her boyfriend and a TikTok alert that Mia posted their video — everyone is loving it! Let the rap s–t begin!

Grade the episode via the poll below, then drop your thoughts on the premiere episode of Rap Sh!t in the comments!