Spoilers ahead for the Peacemaker finale from… five months ago.

Robert Patrick is very much hoping to “ghost” Peacemaker fans, with a possible return in Season 2 of the well-received HBO Max superhero series.

The Terminator 2 and Scorpion alum costarred in Season 1 as the title character’s father, Auggie Smith, who was (among other things) a white supremacist who eventually suited up as the villainous White Dragon.

In the season’s penultimate episode, Peacemaker aka Chris Smith found himself squaring off against the White Dragon, in the middle of a road. White Dragon gave his boy a licking (and even knocked poor Eagly out cold!), before Vigilante leaped onto the villain’s back and ripped at his costume’s circuitry, causing his gauntlets to short out. Peacemaker in turn gained the upper hand and pummeled his pop on the hood of a car. When Chris then grabbed a pistol and raised it to his dad’s unmasked head, Auggie sneered that the boy didn’t have the stones to pull the trigger. And yet Chris did, putting a bullet in the center of Auggie’s forehead. Chris then broke down sobbing, over what he was led to do.

Auggie would be seen again, though, in the season finale’s very final scene, when the deplorable dad improbably sat next to Chris on his trailer home’s front steps. 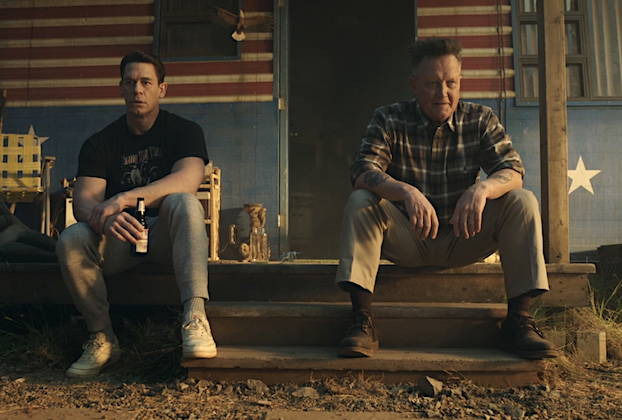 That encore would seem to portend some sort of haunting, Season 2 presence for the not-so-dearly departed patriarch.

Appearing on Michael Rosenbaum’s always-engaging Inside of You podcast, Patrick (at the 1:10:00 mark above) lobbied for Peacemaker boss James Gunn to put Smallville alum Rosenbaum in Peacemaker Season 2, before adding, “Hopefully I get to work, because I am dead.

“To be honest with you, I think this could be the funniest f–king stuff ever, with the dad as the ghost,” Patrick effused. “In my own mind I’m trying to think of the scenarios James is gonna come up with, and there’s a lot he could do. It’s unlimited, because I’m a f–king ghost, dude!”