On Wednesday’s episode of The Challenge: USA, two players’ lack of chemistry nearly sinks their game, while Tyson and Angela continue to beast the competition. But how long will they be able to dodge the house’s increasing suspicions?

With the Algorithm constantly shaking up the game, the players are all on edge as they await the next partner selection. While most seem to be happy with the outcome, it’s evident before they even leave the Arena that Domenick and Cashay’s partnership is going to be a problematic one.

Back at the house, new teammates Shan and DX chat. Shan tries to downplay her social prowess, but Derek knows better. She literally has her own anthem! He’s wary of her, but she’s on his side… at least for this week.

As Cashay opens up to Sarah about her final chapter with Cinco, Dom tells us how much he doesn’t give a bleep about the Love Island exes’ drama. And neither do I!

As Tyson and Angela strategize, Shan watches them with an eagle eye. She knows they’re ones to watch, but hopes Tyson will remain Survivor strong. (Having watched him on four seasons of Survivor, she should know better than to trust him!) 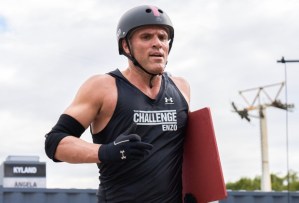 CHALLENGE | In “Hang On, Man,” teams must build a staircase up to a platform where one of them will hold a heavy bar. Then, it’s a race to figure out the game’s phrase (à la Hangman). For each incorrect answer, a bag of sand must be clipped on to the bar. If at any moment the bar drops or its holder falls off the platform, that team is out.

After Tyson accidentally insults Alyssa’s biking “accomplishment” (LOL), the race is on! After solving the stairs puzzle, Ben, Kyland and Tyson race off to start guessing their phrase’s letters. Justine and Cashay take the first weight on their bars, and Justine’s looking like baby Bambi. Tasha, however, is the first to let her weight fall to the ground, sending her and James straight to elimination.

Kyland solves his word puzzle first and races for the finish. Ben’s on his tail, but he’s not fast enough: Kyland and Angela secure the win. Now, they’ve got to decide who will battle James and Tasha in the Arena. 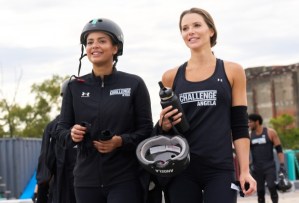 DELIBERATION | The strategy this season seems to be focused on sending weak players into elimination first. That way, players run less of a risk getting partnered with someone they might not want to work with going forward. Tyson and Angela decide Dom/Cash and David/Shan are the weakest of the bunch.

Despite the fact that the three Amazing Racers have talked again and again about sticking together, James has no problem discussing fellow Racer Leo. (Leo’s partner Justine has money in her bank account, after all.) James then tells Leo that he doesn’t want to go against Dom, which hurts Leo a bit knowing that his head is also on the chopping block. Dom, meanwhile, has been mentally preparing to go in, which frustrates Cashay, who understands that going into the Arena is exactly what you should avoid doing, DOM!

THE ARENA | The week’s losers hit the sand, and when it comes time for Kyland and Angela to pick their opponents, they choose Dom and Cash. But Leo tells us the damage is already done. He can no longer trust James. But will James even survive the night?

In “Plug and Play,” teams must jump into a tank filled with water to release building blocks, handing them up to his or her partner who will stack them into a tower. But the catch: T.J. is going to pull a lever which is going to cause the tank to leak. And once the water hits the red and yellow lines, the game is OVER.

James and Dom dive into the tank, and while both men seem to be releasing the pieces quickly, James is the only one to plug his drain. While Tasha and Cash start stacking, Dom’s water is draining FAST… and Cash’s tower falls! She recovers, getting her pieces stacked just seconds before Dom’s water hits his line. T.J. blows the horn ending the match, and Tasha and James are subsequently eliminated.

Who did you think was going to win that Arena battle? Sound off by dropping some comments.