Action, intrigue and sneaky time jumps abound in Westworld‘s “Generation Loss,” an episode mostly concerned with Caleb and his importance to Dolores-Hale. We do get more Christina (and Teddy!) this week, but most of the plot propulsion happens through Maeve, Caleb, Bernard…. Basically every major character except Christina.

When we left them last week, Caleb and Maeve had walked straight into Dolores-Hale’s trap. William fought and bested Maeve while Caleb came face-to-face with a host-copy of his daughter Frankie. Now he’s in some sort of fly-induced stupor.

The scene cuts away from the drama in Delos’ new theme park and shifts to Maeve and Caleb in a different setting, on a different mission. They storm a beach compound and rig the building so that it explodes, taking the last of Serac’s supercomputer Rehoboam with it. As they leave, Caleb sustains a gunshot wound in a brief firefight. Maeve drags him to a nearby beach and attempts to staunch the bleeding but Caleb doesn’t seem to be stabilizing… 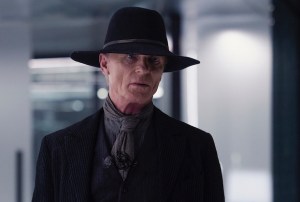 But before we can get any clarity, a hazy Dolores-Hale slowly comes into focus. We’re back with Caleb post-fly attack. Dolores-Hale tells him she plans to use these parasites to infect and control every one of his kind. Nearby, Maeve realizes that this William is a host. She fights him again, this time winning by hacking into the park’s computer system and triggering a piercing sound that incapacitates her enemy. Taking advantage of the disruption, Caleb holds a shard of broken glass to Dolores-Hale’s throat and demands to know how to get the flies out of him. Dolores-Hale refuses to tell him. Later, as he tries to escape the park with Dolores-Hale in tow, Caleb and Maeve are caught in a firefight between the hosts. The flies’ influence seizes Caleb and he grabs an abandoned gun and aims at Maeve, but he is stabbed by a host before he can pull the trigger.

The story then circles back to Christina. Her roomate Maya wakes her up and tells her about a strange dream she had, one where a cloud of flies ruined her family picnic. She recalls how the flies took over her mother, then her father, then finally her. As the two leave Christina’s room, we’re left with her latest painting: the mysterious tower we’ve seen glimpses of throughout the season. There’s definitely more to come on that front. 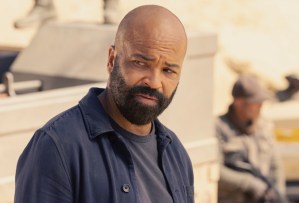 Back in the desert, Bernard, Ashley, and their new “allies” begin their search for the weapon Bernard mentioned. There’s debate amongst the group about whether or not Bernard and Ashley are trustworthy, leading to the two being separated. Bernard leads them to where the weapon supposedly is

While out, Christina and Maya meet with Teddy, who says what he always said when he handed Dolores things: “Don’t mind me. Just trying to look chivalrous.” Teddy and Christina talk, each trading facts about their lives before the latter asks if they know each other.

A still-wounded Caleb struggles to stay conscious. Flashbacks to the earlier scene on the beach reveal two things: that Caleb didn’t die and that Maeve stayed by him for weeks while he recovered. She eventually left because she saw that he could have a life, that he could have something to fight for if she left. She explains that she went off the grid to keep him safe, hence her seclusion in the woods in the first episode.

That night, the William host Maeve fought earlier catches up with them. Maeve agrees to fight him off so that Caleb can contact his friends and get them out of the park. It’s at this moment that the flies decide to take over, and soon Caleb can hear only the ringing in his ears and the faint monologuing of a smug Dolores-Hale. She really loves reminding people how powerful her mind control is.

Dolores-Hale commands Caleb to shoot Maeve but Caleb overcomes her influence and guns William down instead. Enraged and surprised, Dolores-Hale asks how he was able to disobey her. But before Caleb can answer, a wounded William blows a hole through Maeve’s chest and gloats that he has killed her yet again. Maeve remotely activates multiple explosives and appears to kill herself and William. Forgive us if we aren’t convinced that she’s dead dead; she’ll be back.

Caleb briefly loses consciousness and dreams that his men rescue him. When Caleb wakes, Dolores-Hale drops a bombshell: Caleb is a host-copy (#278). 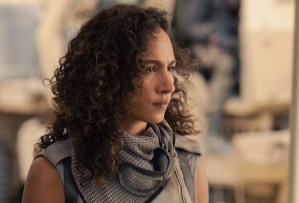 In the desert, Bernard talks with the woman who picked him up last episode. She reveals she doesn’t want to find the weapon; she wants to find the body of her father. Those who called this can pat themselves on the back: the woman (referred to as “C”) is indeed an adult Frankie. Bernard digs and finds the weapon he promised — Maeve, who had long been buried in the desert after her confrontation with William.

The setting changes and Caleb is in a sleek building talking to Dolores-Hale. He runs outside, glimpses that tower we’ve heard so much about, and witnesses everyone around him freeze, as if commanded to do so. Dolores-Hale closes out the episode with a chilling: “Welcome to my world.”

What did you think of Episode 4, and how Season 4 is shaping up?