Saturday’s installment of Flowers in the Attic: The Origin contains many twists, screaming fits and a dramatic death scene that is pure art.

Let’s start with Olivia’s bargain with Alicia, which is really just a trial run for what she does to her grandchildren years later. Alicia — who is carrying Malcolm’s child — agrees to be sequestered away in the east wing for the duration of her pregnancy. Olivia, meanwhile, pretends to be pregnant and plans to raise Alicia’s child as her own once it is born. But after a while, Alicia isn’t content with watching Olivia bond with her son Christopher while she’s locked away.

Making matters worse, Malcolm still sneaks up to Alicia’s room late at night. To combat his unwanted attention, Olivia convinces Alicia to cut off her hair. Remember, he loves pretty things, so an ugly haircut is basically Malcolm repellent. But Olivia takes it a step further and leaves the freshly cut locks on Malcolm’s desk. He isn’t happy about the “gift” and threatens to have Olivia committed to a psychiatric ward.  She hits back with a threat to tell everyone about what he’s done to his father and stepmother, and his response is to stab her in the gut with scissors. She’s fine, though, because he only hit the padding of her fake belly.

One day, Alicia confronts Olivia about her imprisonment and they get into a scuffle. She falls down the stairs while fleeing from both Olivia and Malcolm, and tries to tell the doctor what happened to her while being examined. But between her strange hair and hysterical state, Olivia is able to convince the physician that she’s mentally unfit and has her sedated. Nella is disgusted by this and urges Alicia to play the Foxworths’ game until she can find a way out. Oh, and in case you were wondering, Malcolm is the father of Nella’s daughter Celia. 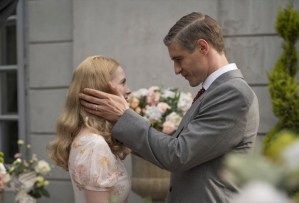 Alicia goes into labor and it’s a whole production. While she’s giving birth, Olivia also pretends to be in labor and screams at the top of her lungs to drown out Alicia’s cries. Alicia gives birth to a girl, whom Malcolm names Corrine after his mother. The Foxworths get a new child, and Alicia gets to leave with her son Christopher.

Jumping ahead, it’s Corrine’s 16th birthday and Malcolm is an overly attentive father who gifts her yet another doll because he wants her to stay his little girl forever. He couldn’t care less about his sons Mal and Joel, who equally hate him for favoring Corrine, among other things. Mal is engaged and wants to access his trust fund early so that he can give his fiancé the life she deserves. But Malcolm is quick to shut that down because, you know, he’s awful.

Malcolm is obsessed with Corrine and bans her from attending a dance after catching her riding on the back of a boy’s motorcycle. In private, Olivia calls him out for being too harsh, and Malcolm accuses his wife of being jealous of their daughter’s beauty. But as Olivia points out to him, she wants Corrine to have experience with boys, so she doesn’t say yes to the first man who proposes like she did with Malcolm. Sick burn.

Olivia helps Corrine sneak away to the dance, but that backfires when she later reveals she’s pregnant. Olivia helps the scared teen get an abortion, unaware that Malcolm has followed them. He confronts Olivia about it over breakfast — making sure to call her a whore — and bans Corrine from leaving the house.

Joel has been hanging out with Celia’s stepson Harry, who hints at Celia being related to Malcolm. When Joel tells Corrine and Mal, they aren’t surprised given the rampant rumors and the strong familial resemblance. Mal then tries to blackmail Malcolm with this to access his inheritance, threatening to tell Olivia that he’s Celia’s father. But Malcolm is unphased and even breaks the news to Olivia himself. If Mal wants that money, he’s going to have to crawl over Malcolm’s dead body.

Now that Olivia knows, she tries to make amends with both Nella and Celia. As she apologizes, Celia warns her that men like Malcolm never stop. Malcolm proves that to be true by lingering outside of Corrine’s bedroom, watching her change clothes. Olivia, catching him in the act, decides to put an end to it.

Malcolm is subsequently poisoned at dinner (and somehow lives, ugh) and all signs point to Olivia as the culprit. But it was actually Corrine, who only wanted to get him sick enough for her to sneak out of the house and attend a party. 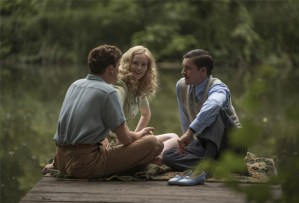 The poison also makes its way to Mal, who swipes his sister’s stash to smoke after catching his father kissing his fiancé on their wedding day. (To be fair, she only did so to ensure Mal gets his inheritance.) Upset, he jumps in his car and drives off with Corrine. Mal soon realizes the cigarettes are poisoned, but it’s too late. He passes out and crashes into a tree — dead at the scene while Corrine is unharmed.

Cue the dramatic scene that deserves its own section in the Louvre: Olivia wailing while clutching Mal’s lifeless body, Mal’s fiancé racing to the scene and then sobbing (while wearing her wedding dress) into Joel’s arms after realizing her love is dead, and Malcolm clutching his distraught daughter Corrine like he isn’t a total monster. That is followed by Mal’s funeral, which features Franz Schubert’s “Ave Maria” and mourners standing in the rain under giant black umbrellas for added effect. This is cinema.

In the wake of Mal’s tragic accident, Joel falls into Harry’s arms, Corrine destroys her collection of dolls and Malcolm berates Olivia for essentially killing their son with that poisoned garden. A despondent Olivia relinquishes control of the household and agrees to do whatever Malcolm says — even destroying the poisonous garden with fire. And just when things couldn’t get worse, Alicia shows up on their doorstep unannounced. Perhaps she needs to borrow some sugar?

So how are we feeling about this week’s episode of Flowers in the Attic: The Origin? Drop a comment below.