Don’t call it a comeback. Or do. At this point, it’s still a bit of a mystery.

We’re talking, of course, about the final scene of Friday’s conclusion to Days of Our Lives: Beyond Salem Season 2. Despite failing to kill Hope — for a second time, anyway — Megan Hathaway was successful in collecting all three prisms needed to cure her frozen father’s previously incurable brain tumor. 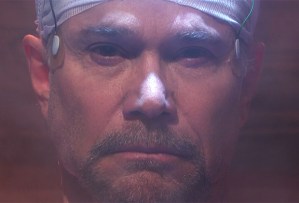 But it wasn’t Stefano who stepped out of the cryogenic chamber at the end of Episode 5 — it was Bo Brady, who had just been told by Angela that his decision to sacrifice his second chance to save Hope earned him a second second chance from the folks upstairs. (Side note: who knew there would be so much red tape in Heaven?)

It’s currently unclear whether Bo will return home and rejoin Days of Our Lives, or if we’ll have to wait until Beyond Salem Season 3 to see how this whole situation sorts itself out. But as Peabo Bryson and Roberta Flack might say: Tonight, I celebrate my love for this resurrection.

Here’s how things shook out for everyone else…

* Despite their best, repeated efforts (take a hint, guys!), neither Joey nor Tripp ended up winning Wendy’s heart. Or even an invitation to visit her in Alaska. Then again, she’s about to be pretty busy, what with her well-deserved promotion and all. Sorry, guys!

* Speaking of Johnsons making travel plans, a still-hospitalized Stephanie received an “interesting” text message, prompting her to wonder aloud, “I might be going home to Salem sooner than they think.”

* Paul proved significantly luckier in love, snagging a goodbye kiss from Andrew before he returned to his life as an international man of mystery.

* Hope vowed to track down Megan, while also promising to be more involved in her grandson’s life — a pair of promises which will likely be kept off camera.

Your thoughts on the many twists and turns of Beyond Salem Chapter 2? Grade the finale and season below, then drop a comment with your full review.