Warning: The following contains spoilers from all eight episodes of Netflix’s Resident Evil.

Netflix’s Resident Evil series, which dropped all eight episodes on Thursday, centers on Dr. Albert Wesker’s creation of the pharmaceutical drug containing the T-virus and the apocalyptic aftermath it creates 14 years later. There’s just one problem: Wesker died in 2009 after a fight that ended with him falling into a volcano and being hit with an explosion on top of that.

A 2005 flashback in Episode 7 explains exactly how Wesker appears in the series, despite that fiery death. The diabolical scientist actually cloned himself in a bunker in the Arklay mountains, creating Albert, Bert and Alby, who are much nicer versions of him. But when Umbrella Corporation CEO Evelyn barges in on his experiment with her soldiers, Wesker tries to get rid of the evidence — killing poor Alby in the process — before fleeing.

As Lance Reddick, who plays Wesker, notes, the Albert that we see in the show “is a clone of the Wesker that died in the volcano.” The menacing, shades-wearing figure in the flashback wearing the black trench coat is the real Wesker who is “still alive [at this point in time] in a bunker with his clones that he’s created.” 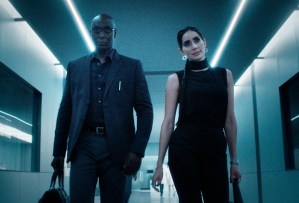 “He figures, ‘If I’m great, more of me is better. I could get more scientific breakthroughs faster,’” Reddick explains. “He doesn’t want to change the world; he wants to take over the world. The character is a complete megalomaniac and a pure psychopath.”

The decision to use clones as a way of bringing Wesker back was an easy one for showrunner Andrew Dabb.

“Clones have always a bit a big part of Resident Evil. It just became very obvious in a couple different ways,” Dabb tells TVLine. “Number one, it’s a way to get Albert back, but a little bit of a different Albert that we met before. The second thing is, this show is very much about parents and children, whether it’s Albert and his daughters, or Jade and her daughter, but also the original Wesker and his children because they were raised by him.”

Twins Jade and Billie are shocked when they find out that their father Albert is a clone after Bert pretends to be him and gets unusually violent over Olive Garden’s unlimited breadsticks. They soon realize that their dad is not who they thought he was.

“They now know who he is,” Dabb notes, “and if you walk out like, ‘Oh my gosh, my dad was this horrible guy. My dad was Hitler, and I’m a clone of Hitler. What does that make me?’ I think that’s something that [Billie and Jade] are struggling with, too. Someone like Albert, he would argue he’s not like his dad at all. But as the show goes on, you start to see maybe he’s a little bit more like his dad than we thought.”

In the finale, Albert sacrifices himself by setting off an explosion in the Umbrella lab to help his daughters escape after Billie was revealed to have been infected by the T-virus. That leaves Bert, who is seen driving off with Billie and Jade in 2022, the last standing clone as far as we know.

What did you think of Resident Evil? Grade the finale below, and then let us know your thoughts in the comments.