Ms. Marvel executive producers Adil El Arbi and Bilall Fallah had no idea that Brie Larson would show up in the post-credits of Wednesday’s season finale. The duo, who directed the episode (as well as the series premiere), only found out about it as they were working on the final edits.

“That scene was shot by Nia DaCosta while shooting The Marvels,” the Captain Marvel sequel due out July 2023, Arbi tells TVLine. “She didn’t know when she was shooting that scene that it was going to be a post-credits scene, and we didn’t know that that was going to be there. We discovered it while we were color-grading the show, and all of a sudden, we had that scene after we had asked [Marvel Studios chief] Kevin Feige the whole time.” 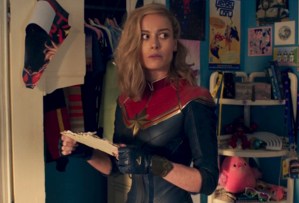 In the scene, Kamala (played by Iman Vellani) is chilling on her bed when her bangle lights up and she’s mysteriously “pulled” into her bedroom closet. However, it’s not the young teen who emerges from the debris. Rather, her hero Captain Marvel aka Carol Danvers walks out and surveys the room, mumbling, ‘Oh, no, no, no, no…’ (Read our full recap here.)

So, what happened there? Did Kamala shape-shift as she is known to in the comics, or is something else at play here? “I assume that they swap places,” Arbi muses. “Kamala is somewhere in some crazy universe, I think.”

In the episode, we also learned that the teen hero’s genetic makeup is different. In a private conversation, Bruno reveals to Kamala that her DNA is “off” compared to the rest of her family — there’s a “mutation” in her gene. That moment is accompanied by the theme from the ‘90s animated X-Men series, which feels like more than just a coincidence. Even so, Arbi isn’t sure of what it means for Kamala in the long run.

“That was the best kept secret of the whole show. We didn’t even know about it until we suddenly had a script,” he shares. “So, when we had it, we asked, “What’s that about? What’s going to happen?’ And Kevin Feige would say, ‘Just shoot this, put the little music on and that’s that. Should you be part of the future of Ms. Marvel, then you’ll know a little bit more.’”

Fallah adds, “Kevin Feige has the master plan. He’s the only one who knows.”

Kamala might not be the sure of her genetics — or really care about “labels” at this point — but what’s clear is she has finally stepped into her own as Ms. Marvel. During a clash with the DODC, she was struck by a drone blast that also momentarily knocked Kamran unconscious. That’s when she utters her famous phrase, “Embiggen,” and does exactly that as her family cheers from the sidelines. For Fallah, that rallying moment signifies how Kamala’s family is the true source of her strength.

“She’s down on the ground. She’s never been so totally [defeated],” Fallah explains. “She’s looking at her family, and that’s where she gets her power because the family is her superpower. She finds in herself the last energy power that she has, and she says ’embiggen’ and then she becomes Ms. Marvel — the full version of herself.”

With Ms. Marvel Season 1 wrapped, Kamala will head to the big screen in the Nia DaCosta-helmed The Marvels, alongside Brie Larson’s Captain Marvel and Teyonah Parris’s Monica Rambeau. And as Kamala’s role in the MCU expands, Fallah hopes to stick along for the ride.

“I hope we will be part of her future and that we hopefully make a movie about her,” he says. “I think there’s a big future ahead of her. Iman Vellani is so young. Kamala Khan is so young. I think there’s so much more. For me, it’s just the beginning of a long, adventurous story.”