Unless your name is Ashley “Millionaire” Mitchell, “polid–king” will only get you so far in The Challenge.

On Wednesday’s episode, Tiffany learned that the hard way when a flirtmance with Cinco rubbed the rest of the cast the wrong way, ultimately painting a huge target on her back.

But when we last left T.J. and the new crew of challengers, we were waiting to hear how the game’s brand new Algorithm twist was going to shake things up. As T.J. explains, the Algorithm is a program that will randomly select new duos every week, so that players will never have the same teammate twice (until they’ve been partnered up with everyone, that is). The partners are selected, and WOW, WHAT A CRAZY RANDOM HAPPENSTANCE: Exes Cinco and Cashay are matched up by the Algorithm (read: production)!

While Cinco and Cashay talk to others about their current situation and the communication problems between them, Justine talks to Tyson about Cely’s exit. In pure Tyson fashion: He doesn’t care. He just wants to kill the next challenge and get a second win under his belt.

Shan, Sarah and others talk about not trusting Tiffany, who’s currently flirting with Cinco as a strategy to stay in the game. But everyone sees it, and they also know how much of a strategic mastermind she was in Big Brother 23. That said, Tiff could definitely be in trouble this week if she doesn’t pull out a victory.

CHALLENGE DAY | In “Yeah Buoy,” teams will climb up a ladder to a group of spinning tires. They must collect a series of letters, drop into the water and rush back to create as many words as they can in 20 minutes. But in true sinister Challenge form, they must leap from a platform to the buoys, which are also constantly spinning throughout the task. Cue the nasty falls!

James takes the worst digger, and it stalls his team’s effort. He and Cayla wind up with zero words to their name, so they’ll definitely be seeing T.J. in the Arena. As for the winners, Tyson and Justine make nine words, bank $5,000 dollars for their individual bank accounts and win safety from the night’s elimination. Plus, they get to throw another team into the elimination. (Can anyone beat Tyson… in anything?) 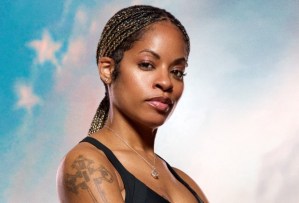 DELIBERATION | James and Cayla tell the winning duo that targeting Tiffany could help dissolve the glue holding the Big Brother alliance together. Justine admits that the possibility of Cashel being seduced by Team BB makes her nervous. Since Tiff and Cashel are a duo this week, getting them both out could benefit everyone in the game. Plus, Tiffany trying to collect the men (in Kyra and Cashay’s words, not mine) doesn’t sit well with many of the women.

With one Love Islander and one Survivor in the driver’s seat, Tyson tells Tiffany that the duos of Enzo/Alyssa and Azah/Xavier could be in his line of fire. And since Tyson likes Tiffany and wants to remain on her good side, that might just be her saving grace for the week.

THE ARENA | T.J. calls the losing team to the sand, and when he asks Tyson and Justine for their decision, they select Tiffany and Cashel after all. We flash back to earlier in the day, and Alyssa and Xavier totally sell Tiff out to Tyson! Tyson knows Tiffany is the BB glue, and a lot of other former houseguests want her gone, too. Alyssa says Tiffany is a good manipulator and liar, while Xavier promises to help Tyson with damage control if he picks Tiff. When T.J. asks Tiffany and Cashel what happened, they have no clue. It’s a total blindside.

Now, I am a Tiffany fan, but the woman is pedaling like she’s going for a leisurely stroll on the beach. Despite that, Tiffany and Cashel are the first to duplicate the first sequence of symbols. But James and Cayla pick up speed and start showboating to work the crowd. (Hey, at least they’re having fun!) And it all works. The Amazing Racers use that momentum to cinch the win, buying Tiffany and Cashel’s one way ticket straight out of the game.

Was Tiffany too confident? Did Tyson make the right play? Let us know your thoughts in the comments below!