The What We Do in the Shadows vampires reunited in Tuesday’s Season 4 premiere — and there’s even a new addition to the family.

We pick up a year later, and the vamps’ Staten Island home is a wreck, with lights flickering and branches growing wildly inside. Laszlo is there watching HGTV marathons — and taking care of the newly reborn Colin Robinson, who’s now grown into a mischievous tyke. Laszlo is trying to school the kid in the ways of “high culture” and “scintillating conversation”: “I think I can mold this blank canvas of a boy into the most interesting adult there has ever been.” (He’s also using a bit of electroshock therapy to give the kid an aversion to boring things.) 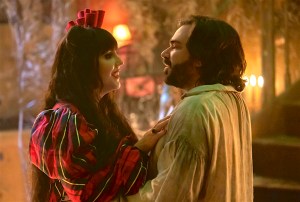 Nadja shows up on their doorstep (with her lookalike doll in tow) and slaps Laszlo across the face for ditching her on her trip to London. She gets over it, though, and they scurry off to have sex, but they’re interrupted by Nandor, who’s back, too! He’s happy to be home, but he soon falls through the floor since the house is so shabby. Nandor explains he only got as far as Fresno on his grand trip, following a nice Wisconsin family across the country and pining for his ancestral homeland. He tried to go back there in a container ship… but it was the one that got stuck in the Suez Canal.

With the house in such bad shape, they wish Guillermo was around to keep things tidy — and on cue, Nadja cracks open a shipping box to reveal Guillermo! (Hey, she gave him some Oreos and Pedialyte for the trip.) He’s mad at them and is determined to start sticking up for himself, but he softens when Nandor asks him to be the best man at his wedding. Who is he marrying? Oh, he hasn’t decided that yet. In fact, he needs Guillermo to help him find his bride. Plus, seeing baby Colin Robinson run around like a wild child and eating handfuls of Count Chocula, Guillermo pledges to keep the kid safe, even setting up baby gates around the creaky old staircase. 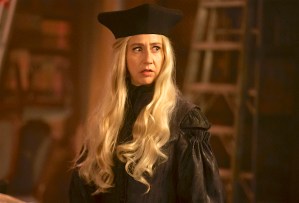 To fix up the house, they’ll need money — which is a problem, since Colin Robinson always handled the finances. They have his ATM card, and they ask Baby Colin for the PIN, but he just lists off a bunch of numbers. Nadja knows how they can make money: They’ll open a vampire nightclub, “like in the film Blade!” Actually, she left the Vampiric Council in London because she pitched her nightclub idea and they turned it down. The other vamps aren’t sure, but she screams so loudly, they give in. So they head to the local Vampiric Council headquarters, where The Guide is waiting for them, and announce they’re opening a nightclub… at the headquarters!

Alright, bloodsuckers: Give the Shadows premiere a grade in our poll, and then hit the comments to share your thoughts.