The following contains a major mid-credits casting spoiler from Thor: Love and Thunder, now in theaters.

Thor: Love and Thunder may have failed Kat Dennings’ post-WandaVision Darcy Lewis, but the first of two end credits scenes offered quite a thrill for fans of TV’s most acclaimed current comedy.

And it certainly gave new context to the Roy Kent quote, “You deserve someone who makes you feel like you’ve been struck by f–king lightning.”

Without spoiling what from the movie itself sets up the mid-credits scene, let’s just say that the god Zeus (played by Russell Crowe) has a bone to pick with Thor, and in the short bonus scene, he tasks a fellow god, Hercules, with exacting his revenge.

Hercules — who is clearly fated for a bigger, future MCU appearance — is played by Ted Lasso‘s Brett f–king Goldstein, hairy chest and all.

Goldstein marks but the latest TV vet to surface in one MCU project or another. For example, in The Falcon and the Winter Soldier, eight-time Emmy winner Julia Louis-Dreyfus unexpectedly showed up Contessa Valentina Allegra de Fontaine, who actually was supposed to first appear in Black Widow‘s post-credits scene (but #pandemic delays) and seems to be assembling a team of antiheroes. And Eternals indicated that Game of Throne alum Kit Harington’s mild-mannered Dane Whitman is destined for greater things.

Much more recently, Doctor Strange in the Multiverse of Madness‘ introduction of the Illuminati (in one universe, at least) featured cameos by John Krasinski (of The Office and Jack Ryan), Anson Mount (reprising his Marvel’s Inhumans role) and Hayley Atwell (continuing her movies- and TV-spanning run as Agent/Captain Peggy Carter). 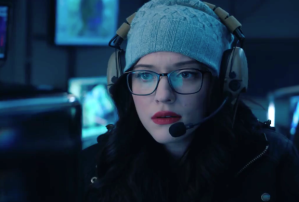 As far as Thor 4‘s ties to TV’s ever-growing array of Marvel series on Disney+, the aforementioned Kat Dennings shows up in an early scene, reprising her Thor and Thor: The Dark World role as Dr. Darcy Lewis, the colleague and sorta-confidante of Natalie Portman’s Dr. Jane Foster, though there is zero reference to Darcy’s involvement in the events of WandaVision, where she played a pivotal role in solving the Hex/Westview Anomaly mystery (and rooting out a S.W.O.R.D. baddie).

If you caught Thor: Love and Thunder during its opening weekend, what was your reaction to Brett Goldstein’s rousing cameo?