Now streaming on Peacock, the first episode of Beyond Salem‘s second season wastes no time reuniting Days of Our Lives fans with one of the soap’s most-missed characters — though not everyone is thrilled to see her.

The week-long event begins with Ciara and Ben arriving in Montreal, where they’re greeted by none other than Hope Williams Brady (played by Kristian Alfonso, who left Days in 2020). It’s all hugs and kisses as Hope finally meets her grandson, but once the group is settled in Hope’s new Canadian digs, the gloves come off.

Ciara rips into her mother, demanding to know why she didn’t return to Salem for her and Ben’s real wedding, much less for the birth of their son.

“There are a lot of people who loved you who were very hurt when you weren’t around,” she says. “Shawn, your son, Grandpa Doug, Grandma Julie — I guess that just means you don’t care about us anymore. That must be it.”

Hope insists that this is “the furthest thing from the truth,” and that Ciara, Shawn and baby Bo are the most important people to her in the world. She pleads with Ciara not to judge her because, as Hope says, “I judge myself harshly enough as it is.”

Thinking that her mother has been harboring dangerous secrets, Ciara is actually relieved when Hope says that she’s been busy coaching figure skating at a nearby rink. But that’s only part of the truth (if true at all), as we later see Hope poring over a folder of top-secret ISA files after Ciara has gone to bed.

To her credit, Hope starts to tell Ben and Ciara the truth over breakfast the next morning, but the big reveal is interrupted by a knock at the door. It’s a shady gentleman named Harris Michaels (played by soap vet Steve Burton), the same man viewers saw kidnapping Patch and John Black earlier in the hour. But the only thing he comes armed with this time are flowers for Hope, which she happily receives… along with a kiss!

So here’s the big question as we head into Tuesday’s second episode: Is Hope blinded by love, or is she secretly aware that the man she’s dating is working for — wait for it — Stefano DiMera’s presumed-dead daughter Megan Hathaway?! Kidnapping aside, can anything good come from the return of a DiMera, not to mention one that’s been in hiding since 1985?

Other developments in Episode 1…

* If you’re displeased by the sight of Hope kissing the enemy, just imagine how Bo feels! Via the magic of streaming television, Hope’s ex has a front-row seat to the action from heaven, where an angel named Angela (played by the incomparable Loretta Devine) is punishing him for bringing Tripp back to life earlier this year. Apparently getting into heaven is a lot easier than playing by its rules. 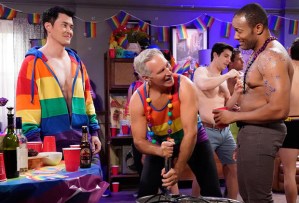 * Prior to being kidnapped by Michaels, Patch arrives in Seattle with Kayla to pay the Johnson kids a surprise visit. Of course, neither of them could have predicted that a bomb (disguised as a pizza box, as if nothing is sacred!) would land Stephanie in the hospital.

* As for John, his kidnapping goes down in San Francisco, where he’s celebrating Pride with his son Paul. (The sight of him dancing to EDM in a rainbow tank top makes the whole crisis worth it, to be honest.) Paul immediately contacts the ISA, but it isn’t Shane who shows up at Paul’s door the next day — it’s Shane’s son, Andrew Donovan. Cue the sparks.

Your thoughts on the premiere of Beyond Salem‘s second season? Weigh in via the poll below, then drop a comment with your full review.