The tension isn’t letting up anytime soon as Better Call Saul returns for its final six episodes — and the body count won’t stop climbing, either.

After a cryptic opening that features a shoe washing up on a beach with footprints leading to Howard’s car parked in the sand, Monday’s premiere picks up right where we left off, with a shocked and terrified Jimmy and Kim standing over Howard’s dead body as Lalo points a gun at them. Jimmy swears he never ratted Lalo out, but Lalo doesn’t care. He gives Jimmy car keys and an address to drive to. There’s a camera and a loaded gun in the glove compartment, he adds. He wants Jimmy to drive to that address, take that gun, walk up to the door and shoot the man who opens it, “and you keep on pulling that trigger till it’s empty.” He wants a photo as proof, too; the guy he’s shooting “kind of looks like a librarian,” he notes, so he’s not a threat. (Yep, he’s talking about Gus.)

Jimmy snaps into negotiation mode and tells him to send Kim instead, since the person is more likely to open the door for Kim. Lalo thinks she’s too clever and will try to get out of it, but Jimmy persists, and he and Kim fight about it so much that Lalo agrees, just to shut them up. He gives Kim an hour to do the deed and come back: “The clock’s ticking, Mrs. Goodman.” After she leaves, Lalo ties Jimmy up with zip ties and tells him about Nacho and Gus’ attempt on his life: “They killed people I care about.” He wants to know what Jimmy knows about this — he knows Jimmy knew Nacho — but Jimmy professes his innocence. So Lalo gags him and turns up the TV loud to muffle his cries for help before leaving. Jimmy tries to free himself, but he only manages to knock himself onto the floor, face to face with a dead Howard. 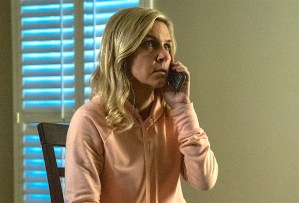 Kim drives Lalo’s car to Gus’ house, stopping at a red light right next to a cop car, but she doesn’t say anything. She gets to Gus’ and pulls the gun out of the glove compartment, walking up to the door and ringing the bell… but before she can shoot, the person answering the door grabs the gun and pulls her inside. It’s Mike and his henchmen, who sit her down and get her story about Lalo sending her there to kill — well, they have a Gus lookalike there anyway instead of the real thing. Kim is furious with Mike: “You said you were watching us! Where were you?” Mike leaves two men to protect Gus, who is hiding out in a secure part of the house, while he takes two men with him to Jimmy’s condo. A car of henchmen leaves the laundry facility, too… and Lalo is waiting nearby, sneaking inside while the coast is clear.

Gus wants to talk to Kim, and she tells him Lalo tried to send Jimmy, but Jimmy talked him out of it. “He talked Lalo out of it?” Gus says incredulously… and with a bit of admiration as well. He leaves the house, too, on a mystery mission with two men in tow. Mike and his men arrive at Jimmy’s, and he tells them Lalo left right after Kim did. We learn that Gus is heading to the laundry facility — and once he gets inside, gunfire rings out, with Lalo quickly wiping out all of his guards. He holds a gun on Gus and records a video for Don Eladio, showing him proof that Gus has been building a meth lab behind his back. He presses Gus to give him a tour, and when Gus hesitates, Lalo shoots him dead in the chest. (Gus has body armor on, but the force of the bullet still takes his breath away.) 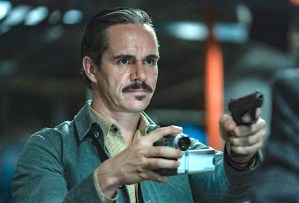 Gus reluctantly takes Lalo down into the lab, where Lalo marvels at how much meth they could cook up down there. He’s ready to pull the trigger, but Gus wants to tell “that fat pig” Don Eladio what he really thinks of him first. While he goes off on a long rant insulting Don Eladio and the Salamancas, we see a gun hidden nearby — and suddenly, Gus triggers a blackout and grabs the gun while Lalo shoots wildly into the darkness. Bullets are exchanged, and when Gus flips the lights back on, Lalo is gasping for his last breath, blood pouring out of his mouth. He lets out a final laugh before he dies, and Gus pulls the bullet out of his body armor and tosses it at him. He’s bleeding significantly under the armor, though.

He calls his Los Pollos Hermanos employee Lyle and explains that he’ll be out all week for “a family emergency” while a henchman patches up his wound, with a doctor on the way. Mike doesn’t want Gus fighting his own battles: “This could’ve ended a whole lot different.” (“It could’ve,” Gus shoots back.) Back at Jimmy’s condo, he and Kim reunite with a hug as Mike and his men roll in a brand new refrigerator, using the old one to transport Howard’s body. They’ll set up Howard’s car with cocaine in the upholstery and make it look like a suicide. (That explains the car at the beginning.) Mike tells Jimmy and Kim to tell the cops Howard came by that night, seemed high and left: “You keep telling the lie you’ve been telling.” 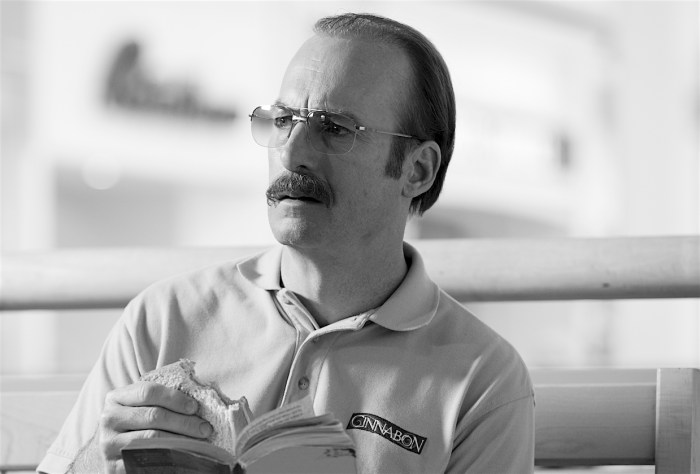 Jimmy and Kim are to go about their normal routines as usual, he says: “Today, you’re Meryl Streep and Laurence Olivier.” He adds that “I need to impress upon you: None of this ever happened.” They agree, and Mike heads back to the lab, watching as a crane digs a huge hole in the dirt before they dump Lalo and Howard’s bodies in there next to each other. (That’s a cruel twist of fate, isn’t it?) But first, Mike takes Howard’s wallet, rings… and shoes. He also stares down at the bodies in the hole, his face twisted with conflict and regret, as the crane covers them up with dirt again.

How’d you like that premiere? And are you sorry to see Lalo go? Give the episode a grade in our poll, and then hit the comments to share your thoughts.