At this point, it’ll take a miracle to keep Sistas‘ Zac from serving a lengthy prison sentence. Well, a miracle or a lazy plot twist — we’ll settle for either!

Not only did Wednesday’s episode reveal that Zac was put back on probation for failing to pay child support, but he’s looking at a minimum of 10-15 years for assaulting Hayden. This, of course, was news to Zac, who claims he had no idea that you could sue someone for assault.

(Come to think of it, that gives me an idea for the perfect legal loophole: “Your Honor, you can’t put this man in prison. He has the mental capacity of a minor!”)

Anyway, I have no doubt that this show will find some way to #FreeZac, I just hope it’s sooner rather than later — the lighting in that holding room isn’t flattering to anyone. 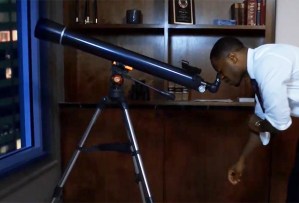 * As if recruiting Hayden as his little spy wasn’t enough, Gary bought a professional-grade telescope with which to peer into Andi’s apartment like the cartoon villain that he is. And he got quite an eyeful when Robin dropped by. (“He’s giving her back shots? That ain’t right!”) Sadly, this means Hayden also knows that Robin isn’t really gay, something he never should have believed in the first place. As Gary reminded him, “You’re a lawyer. You should know when someone’s lying!” You’d think by now Gary would know that everyone else at the firm does the real work. Andi, Fatima and Hayden are just there to bring the drama — and we thank them for it.

* Karen and Aaron’s trip to pound town was rudely interrupted by the former’s nosey friends, who barely even knocked on her door before barging in and seeing “someone tearing that ass up.” (You really have to appreciate Danni’s eloquence sometimes.) And things only got messier when Karen confirmed to the girls that she doesn’t know if the baby is Zac’s or Aaron’s, to which Danni again knew just what to say: “What kind of Maury Povich s–t is this?” Danni later cut the tension in the room by “accidentally” spilling the news about Bayo being a prince, at which point Sabrina immediately regretted making Danni get up early for this.

* Calvin turned down Que’s offer for a good time (“It doesn’t mean you’re gay, it means you like to get freaked!”), but that wasn’t the end of their love story. No, sir. Maurice returned home to find Que in his bed, wearing nothing but his underwear, with Calvin face-planted directly in his lap. The two buckets of vomit corroborated Que’s story about Calvin getting sick and passing out, but they don’t quite explain why Que was practically naked. (Just kidding. No excuse needed.)

OK, let’s talk: How do you predict the show will somehow #FreeZac? Is Karen a saint for not murdering her interrupting friends? And is Calvin really 100-percent straight? Drop a comment with your thoughts below.