After learning of his horrific fate in the not-so-distant future, Captain Pike has struggled throughout Season 1 of Star Trek: Strange New Worlds with the knowledge of that catastrophic explosion which leaves him severely disfigured.

The Enterprise captain is forced to confront that impending future in Wednesday’s season finale when he meets a young boy named Maat who is poised to die in the training accident that disfigures him.

With his mind set on altering their fates, Pike is visited by his future self, who warns of end-of-the-world results for attempting to change things. Using a time crystal, Pike is propelled seven years into the future where Spock is his Number One, since Una is somewhere out of reach.

The Enterprise has received a red alert about an unknown vessel attacking Federation outposts near the Neutral Zone, the area surrounding the Romulan Empire. Ortegas immediately suspects the Romulans, but Pike doesn’t want to make assumptions. One wrong step means a potential war, and that would be a disaster.

Pike tells Spock about his sudden trip to the future, and Spock’s first instinct is to assume command since his captain has been mentally compromised. That’s until Pike suggests a Vulcan mind meld, which proves he is of sound mind and telling the truth. In this timeline, it’s been six months since the explosion, but no one was hurt. Pike wants to know why he was sent to this moment in time, and Spock believes he’s been placed at a crucial moment where the future hangs in the balance. The only way to find out what this future holds is to act as he normally would. 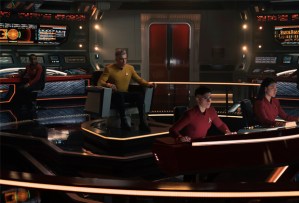 Intel from a commander reveals that several outposts were destroyed after being hit with high-energy plasma, and that the unknown attacker is invisible just before launching the assault.

We get an unexpected cameo from Paul Wesley’s James T. Kirk, captain of the U.S.S. Farragut, who offers to help. (Read our full interview with Wesley here.)

His ship also received a distress signal from the outpost. Cue a polite first meeting between Kirk and Spock, who don’t know each other in this timeline. All evidence points to the Romulans behind the attacks, but Pike notes that they can’t enter the Neutral Zone because that would be a declaration of war. Kirk has another idea: shadow the vessel — appearing as a reflection — to buy them more time.

In a private meeting with Pike, Kirk’s brother Sam gives more insight into the captain of the Farragut. Sam describes his younger sibling as a guy who “doesn’t like to take the path everyone else does” and who doesn’t like to lose. When Pike asks if he should be worried, Sam insists he’s a good captain — even if he likes to bend the rules.

The team eyes a comet with a trail reflecting a signal Spock has deciphered. It’s a feed from the Romulan ship’s bridge, finally revealing what the hostile aliens look like. Everyone is disturbed by how similar they are to Vulcans — except for Spock, who does his signature eyebrow raise out of curiosity.

Kirk beams aboard the Enterprise just in time for a meeting about how they should handle the situation. Lt. Ortegas is inclined to fire on the Romulan ship, but Dr. M’Benga thinks that will start a war. Kirk leans toward attack because allowing the attacks on Federation outposts to go unanswered runs the risk of war. Spock is also pro-attack, viewing that as their only option at this point. Here’s when Kirk kicks in with another idea to track the Romulans’ location at the tail end of a comet, where it will be temporarily revealed by the debris.

As the Enterprise and Farragut flank the Romulan ship on either side, they realize something is amiss. The Romulan ship surprise-attacks the Farragut, which is destroyed in the battle. (Their crew safely beams aboard the Enterprise first, though.) Pike then strikes up a deal with the Romulan commander for a two-hour ceasefire so that both species may talk for the first time in a century. Not everyone is happy, given what happened with the Farragut, least of all Ortegas.

For those wondering what happened to Una, we learn that she’s been serving out a sentence during the last seven years for concealing her identity as an Illyrian from the Federation.

Kirk isn’t so sure the Romulans can be trusted and believes they need a backup plan, like calling in reinforcements. However, they are weeks away from getting help, so they’re really in a bind. But as Kirk points out, the Romulans don’t know that. He asks to borrow a shuttle for yet another brilliant plan.

When it’s time for discussions to continue, the Romulan commander leans towards peace. But his subordinate calls in a full fleet as backup, escalating the situation.  A leader from the Romulans’ flagship demands their surrender, and it looks like the Enterprise is seconds away from disaster. But Kirk shows up in the nick of time with his own fleet of unmanned mining ships — a fake-out to look like backup. When Pike refuses to surrender, the Romulans open fire and declare war on the Federation. The Enterprise warps away, but not before taking major damage, and Spock is severely disfigured in a radiation explosion, Pike’s fate having fallen on him. 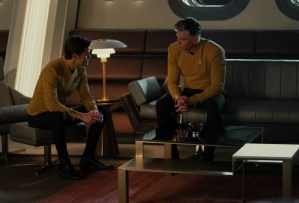 The worst-case scenario has arrived, and Pike is stunned. Future Pike reveals that things get worse, with millions dead from the situation Pike caused (which also should have never happened). If Pike alters his fate, this is what awaits him. That lesson is enough for Pike to reconsider changing his future.

But before returning to the present, he shares a drink with Kirk, who points out that sometimes one just can’t avoid a fight. Pike then tells Kirk that he’s a good captain and that the Enterprise would be lucky to have him.

Back in the present, Pike is relieved to see Spock alive and well. He also deletes his files on the future accident, fully accepting his fate. With that weight lifted from his shoulders, he walks to the bridge in a chipper mood and a pep in his step.

Unfortunately, the good vibes come to a screeching halt when Una is arrested for concealing her Illyrian heritage. This can’t be good. (Note: TVLine has confirmed that Rebecca Romijn will be back as a series regular for Season 2.)

What did you think of Star Trek: Strange New Worlds‘ Season 1 finale? How did you feel about that Kirk cameo? Grade the episode below, and then sound off in the comments.