One of Stranger Things‘ creators has responded to leading lady Millie Bobby Brown’s semi-serious suggestion that the Netflix series make like Game of Thrones and kill off a slew of major characters.

In a Q&A with The Wrap (at the 2:15 mark in the video below), Brown and co-star Noah Schnapp pondered the idea of the fifth and final season serving up some top-shelf casualties. 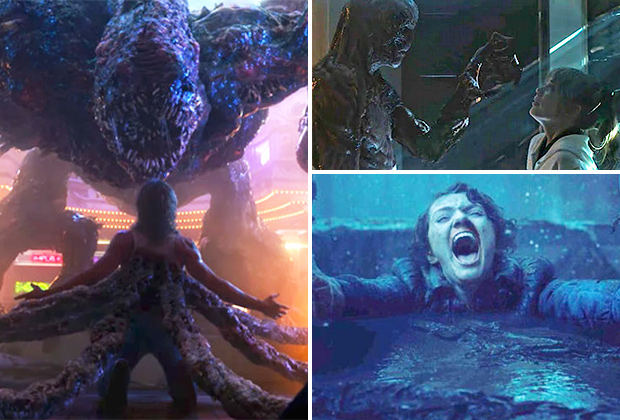 “They need to kill off some people… [The cast is] way too big,” Brown opined. “Last night we couldn’t even take one group picture, there were like 50 of us.

“I was like, ‘You need to start killing people off,'” the actress added, somewhat jokingly echoing Schnapp’s call for “one huge massacre scene.”

The problem, MBB quipped, is that series creators Matt and Ross Duffer “are two Sensitive Sallies that don’t want to kill anyone off,” while she contends, “We need to have the mindset of Game of Thrones.”

Matt Duffer, during the brothers’ visit to the Happy Sad Confused podcast, addressed Brown’s comments, saying, “Believe us, we’ve explored all options in the writing room,” but “We aren’t Game of Thrones,” he attested. “This is Hawkins, it’s not Westeros.”

“When Barb dies [in Season 1], it’s two seasons’ worth of grappling with that,” Matt reminded. “Every death has impact.”

That said, “As we’re moving into the final season, more of that is on the table,” he added. Then, with a nod to Brown’s “Sensitive Sallies” characterization of the writers, he said, “There is logic behind it, and has nothing to do with my sensitivity.”

Who do you think/fear might kick the supernatural bucket in Stranger Things’ fifth and final season? Weigh in below!