Luca’s little sister just got some big news: Daniella Perkins, who recurred in grown-ish‘s fourth season as Kiela, will be a series regular when the Freeform comedy returns for its revamped Season 5, TVLine has confirmed. 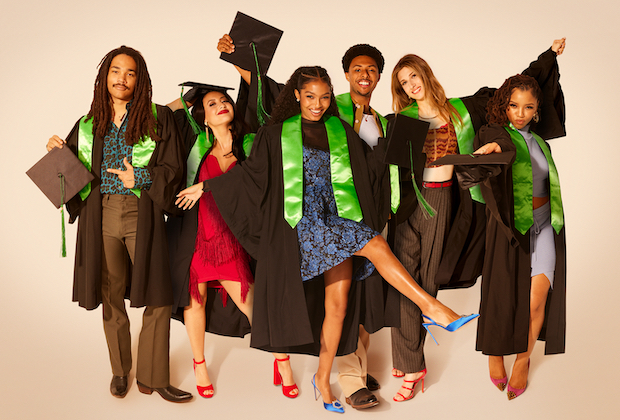 We’ll also be meeting six new recurring characters, including Tara Raani as sophomore Zara, an overachieving Muslim student who is proud and open about being queer; Justine Skye as freshman Annika, an ambitious newbie who chose Cal U because it’s “good for her brand”; and Amelie Zilber as freshman Lauryn, a devout Christian who often overcompensates for her naivety.

Other new recurring characters include Ceyair Wright as Zeke, a refreshingly endearing all-American football player; Matthew Sato as sophomore Brandon, whose charm and drive will make for a great political career one day; and Slick Woods as freshman Slick, a filter-less style icon.

Our sister site Deadline was first to report the promotion/new castings.

* Paramount+’s Star Trek: Prodigy will get a second window on Nickelodeon, with Season 1 episodes airing Fridays at 8 pm from July 8 through Aug. 5. The animated series was previously renewed for Season 2; the second half of Season 1 is still awaiting a release date.

* Freeform has handed a series order to The Watchful Eye, starring Mariel Molino (Promised Land) as a live-in nanny for a wealthy Manhattan couple who “quickly learns that everyone in the mysterious building has deadly secrets and ulterior motives,” per the official synopsis. Amy Acker (Person of Interest), Warren Christie (The Village) and Kelly Bishop (Gilmore Girls) lead the supporting cast.

* HBO Max has renewed the adult-animated series Ten Year Old Tom for Season 2. The series is created, produced, directed and written by Steve Dildarian (The Life and Times of Tim).